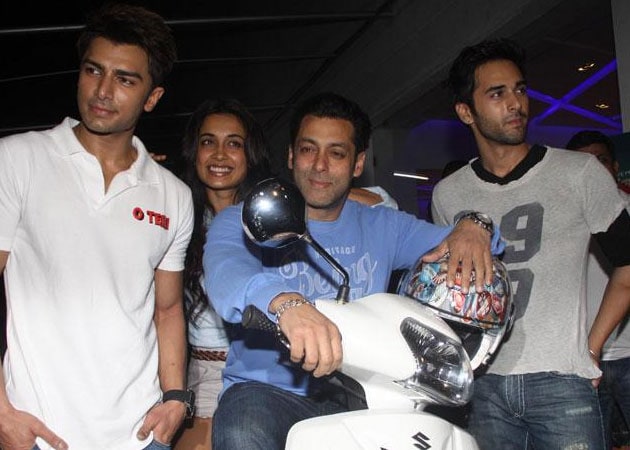 Salman with the stars of the movie at the screening.

Actor-producer Atul Agnihotri says it was his star brother-in-law Salman Khan who suggested the former to make O Teri.

Actor-producer Atul Agnihotri says it was his star brother-in-law Salman Khan who suggested the former to make O Teri.
Umesh Bist has co-written the forthcoming film with Neeti Palta. The film is said to be inspired by true events, especially the 2010 Delhi Commonwealth Games (CWG) scam.
Pulkit Samrat and Bilal Amrohi will be seen playing intern journalists, who are in search of a big scam to get attention at work and prove themselves.
"Salman suggested me to make a film on this story," Atul told reporters at the screening of the film. "He was the one who met the writer (Umesh Bist and Neeti Palta), read the story and then called me and said, 'If after Bodyguard, you are not making something else, do this story, it is very good'. Then I heard the story and we all were very excited," he added.
Atul Agnihotri, who is married to Salman's sister Alvira feels the audience will connect with the film and said, "Today's audience is very young and everybody is looking for a young connect film."
O Teri, which will hit the theatres on March 28, features Salman in a special song.