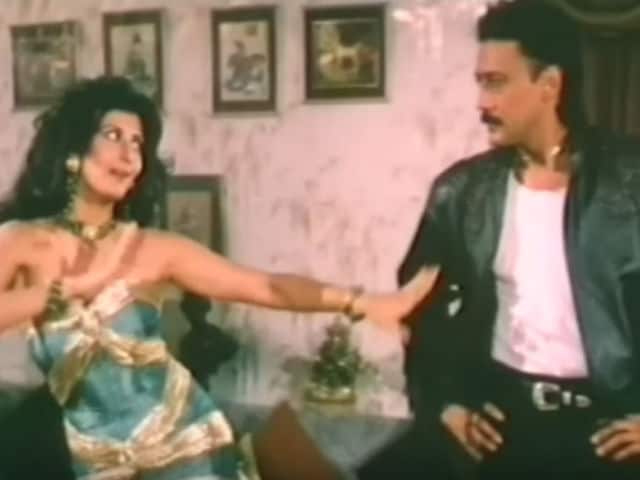 It's Throwback Thursday and actress Sangeeta Bijlani shared a picture which will brighten up your day (though the pic is black-and-white). Sangeeta shared an old pic from a party to celebrate the success of 1989 Tridev. The film also featured Naseeruddin Shah, Sunny Deol, Jackie Shroff, Madhuri Dixit, Sonam, Anupam Kher and Amrish Puri - some of whom can be seen in the picture. The film received many accolades and was also critically acclaimed. The songs of Tridev such as Tirchi Topiwale, Gali Gali Mein Phirta Hai, Oaye Oaye and Gajar Ne Kiya Hai Ishara rule the dance floor even today, 28 years after they released.
Here's the throwback pic Sangeta Bijlani shared:

Sangeeta Bijlani debuted in Bollywood with 1988 film Qatil and followed it up with films like Hathyar, Jurm, Yodha and Khoon Ka Karz to name a few. She was last seen in 1996 film Nirbhay. The same year she married cricketer Mohammad Azharuddin and quit Bollywood. Before marrying Azharuddin, she was dating Sangeeta Bijlani actor Salman Khan.
Sangeeta Bijlani was all set to make a comeback with Onir's Shab, but she later opted out of the project and was replaced by Raveena Tandon. Back then Sangeeta told news agency IANS that she felt like a "newcomer" but "her relationship with the camera didn't end." She said: "I've always been very comfortable facing the camera. I've been there for so many years. Although I was out of the public domain for so many years, the relationship with the camera didn't end. It was dormant."
Sangeeta Bijalni is also a blogger.
(With IANS inputs)