Sania Mirza Signaled to Priyanka Chopra Through the Padma Awards

Luckily, she had help in the form of tennis star Sania Mirza, who received the Padma Bhushan. "We were separated - the Shris, the Bhushans, the Vibhushans," said Priyanka - so communication with Sania had to be via hand signals. 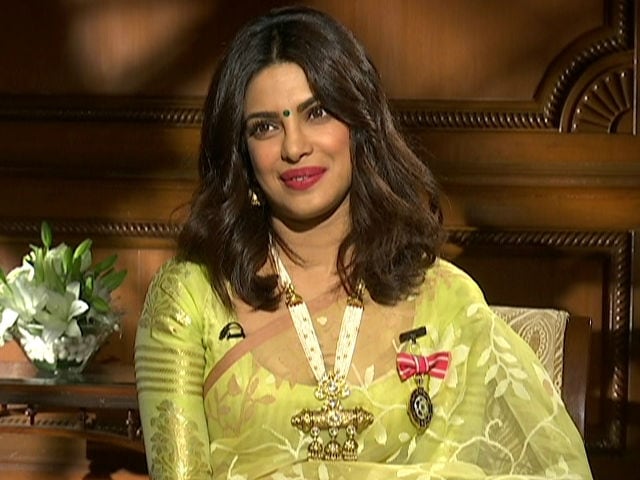 Priyanka Chopra in conversation with NDTV.

This year, Priyanka Chopra has filmed Quantico, been cast in Baywatch, presented an Oscar, starred in Jai Gangaajal AND received a Padma Shri - and it's only April. Despite having been all but claimed by Hollywood, the 33-year-old hasn't entirely abandoned her home country - she was in New Delhi to collect her Padma Shri and told NDTV's Vikram Chandra that she really needs to buy a plane of her own, not a house.
"I do live on a plane. Completely. I need to buy a plane instead of a house," said Priyanka.
But make no mistake, no amount of frequent flyer miles will displace India from heart. "Home is always India. Home Will always be India. I am never confused about that. But where my house is, yes. I am, I go where my work takes me. I've conceded to the fact that I am destiny's child, I think, and my work takes me places that no man's been before," Priyanka said, "But I really miss home. It's very hard to go to a different country. It's like being in college."
She may have won the West but receiving a Padma honour made Priyanka nervous. For one, she was afraid she'd trip over herself and fall on President Pranab Mukherjee (save it for the Oscars, Priyanka - Jennifer Lawrence has been there, done that).
Luckily, she had help in the form of tennis star Sania Mirza, who received the Padma Bhushan. "We were separated - the Shris, the Bhushans, the Vibhushans," said Priyanka - so communication with Sania had to be via hand signals.
Breathe, Sania telegraphed across to Priyanka. "The whole time Sania Mirza was sitting across from me, and just before I sat down, I told her that I was very nervous. So the whole time, I was only looking at her and she was like fix sari, fix hair. This that, delicate. So when I got up, Sania was like * breathe * - so then I got up like that very nicely. And then I did my thing. I was only nervous that I'll trip and fall on the President. But I always feel like this. When I was getting the National Award also, I thought I'll trip and fall on President," Priyanka said. (Also Read: Does Priyanka Chopra Wear the Red Swimsuit in Baywatch? Answer Here)
Priyanka Chopra now returns to USA to film Baywatch with a cast headlined by Dwayne Johnson.