"I am still writing our love story! Someone caption this picture for me," Maanyata captioned the pictures 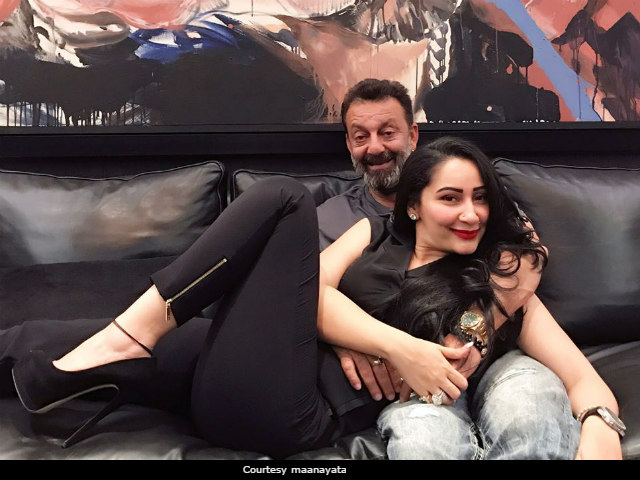 Actor Sanjay Dutt fans are almost always updated with the actor's whereabouts because of wife Maanyata's regular social media posts. Yesterday night, Maanyata posted a series of pictures featuring herself and Mr Dutt, which will drive the bluest of the mid-week blues away. The pictures appear to have been clicked at the Dutt residence and feature the Dutt duo as posing with much coordination. And we get cute photographs of the Dutts as results. "I am still writing our love story! Someone caption this picture for me," Maanyata captioned the pictures. In the caption, Maanyata also mentioned that the Dutts had a family dinner on Monday, before or after which the pictures seem to have been taken. "Crazy night," she wrote.

Meanwhile, Sanjay Dutt is all set to return to the silver screen with Bhoomi, which will be his first film since he walked out a free man from Pune's Yerwada jail, where he was serving his term in relation to the Bombay Blasts. Mr Dutt is currently busy shooting for his comeback film and on his way to work, there's always time for selfies. Thank the Mumbai traffic. Sanjay Dutt co-stars with Aditi Rao Hydari in Bhoomi, which is slated to release this year.

Bhoomi kept the 57-year-old actor away from his home city for a brief while but Maanyata and his children - Shahraan and Igra - dropped by on the sets. "Nothing compares to a simple ride on a scooter with the family... exploring the lanes of Agra," wrote Maanyata.

Sanjay Dutt has a packed schedule ahead of him. He will reprise his role as the much-loved Munna Bhai in Rajkumar Hirani's third instalment of the comedy series. He has one film each with filmmakers Vidhu Vinod Chopra and Siddharth Anand in the pipeline.
Meanwhile, a biopic on the Khalnayak actor is also being made with Ranbir Kapoor playing the protagonist.