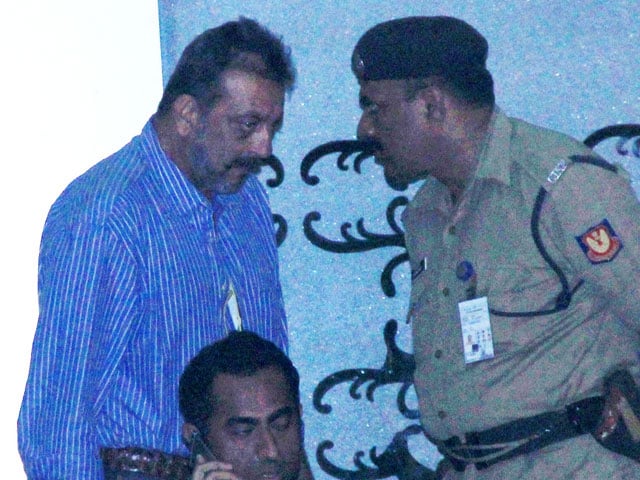 Sanjay Dutt returns to his Mumbai residence from the Yerawada Jail on January 9.

Bollywood actor Sanjay Dutt, who went to Yerawada jail in Pune on the end of his 14-day furlough but did not surrender, returned home on January 9. He is currently at his home with his family, awaiting a decision on his request for its extension, his lawyer said.
"The authorities have yet to inform us on his application seeking extension of furlough leave. Till then, he is at home in Mumbai," lawyer Hitesh Jain told IANS.
Mr Dutt, 55, who flew to Pune and went up to Yerawada Central Jail, spent a few hours in the vicinity of the prison and later went away without surrendering though his 14-day furlough had ended.
The reason was that a government official had said that it was not necessary for him to go back to jail till a decision was taken on his December 27 application for extension of his furlough.
He had been granted a 14-day furlough to go home on December 24.
Before leaving for Pune on December 8, Mr Dutt told media persons that his application for extension of furloug was still under process.
"We made the request for extension the furlough on December 27 and it is still under process. As the laws stipulate that I must surrender myself if I am not granted the extension, I am doing it now," he had said.
Earlier he was released on furlough in October 2013 for two weeks on health reasons, followed by a similar leave in December 2013 to tend to his ailing wife, Maanyata, attracting charges of favouritism.
Mr Dutt's latest furlough saw him attending a special show of actor Aamir Khan superhit film PK (in which he plays a pivotal role) and celeb parties, while exhibiting his new set of eight abs built up in prison.
In February last year, the Bombay High Court had commented on the diligence in granting the actor's requests for furlough which was not visible in case of other convicts who applied for leave.
Mr Dutt was convicted in 2007 for illegal possession of an AK-56 assault rifle during the 1993 Mumbai communal conflagration before the March 12, 1993 serial bomb blasts in the city and sentenced to six years jail. The Supreme Court had upheld the conviction in 2013 but reduced the sentence to five years, less time already served.
Mr Dutt surrendered on May 16, 2013, and was moved to the high-security jail in Pune to serve the remainder of his 42-month sentence.