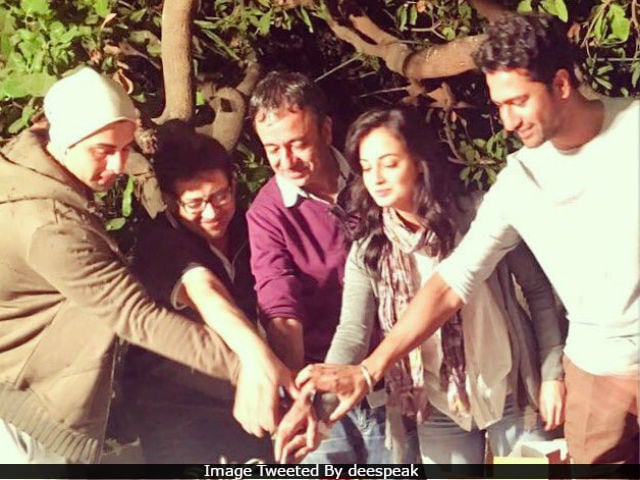 The shooting for Rajkumar Hirani's ambitious project, the biopic on actor Sanjay Dutt, began on Saturday. Ranbir Kapoor will essay the role of the Khalnayak actor. The film also stars Masaan actor Vicky Kaushal and Paresh Rawal, who will play Sanjay's father and actor Sunil Dutt, reported news agency PTI. The film is based on the Sanjay Dutt's rise to stardom and his subsequent fall after he was convicted and sentenced to jail in connection with the 1993 Mumbai Blasts. Rajkumar Hirani, who has earlier worked with Sanjay Dutt in Munna Bhai MBBS and Lage Raho Munna Bhai, tweeted about the film's shoot. He wrote: "First shot taken now for Sanjay Dutt's biopic. Canning a very funny scene. Excitement in cast and crew."

Ranbir, 34, who plays the protagonist, had earlier said that he doesn't think he deserves to play Sanjay Dutt. "It is a very difficult film. To represent Sanjay Dutt and work with (director) Rajkumar Hirani, I don't even think I deserve this film. But, I am looking forward to working on it," as reported by PTI.
Meanwhile, actress-producer Dia Mirza, who was a part of Lage Raho Munna Bhai, is the latest addition to the cast. The actress shared a photograph from the set of the film in which she is seen cutting a cake with Ranbir, Vicky Kaushal and Rajkumar Hirani. She wrote: "The happiest place in the world is on a @RajkumarHirani film set #SanjayDuttBiopic #RanbirKapoor @vickykaushal09."


The happiest place in the world is on a @RajkumarHirani film set :) #SanjayDuttBiopic#RanbirKapoor@vickykaushal09pic.twitter.com/C7jf0MIOZJ

Sanjay Dutt, 57, completed his jail term on February 25, 2016. Before going to jail in 2013, the actor completed films like Ungli, Policegiri and PK. He will make a comeback Omung Kumar's Bhoomi.