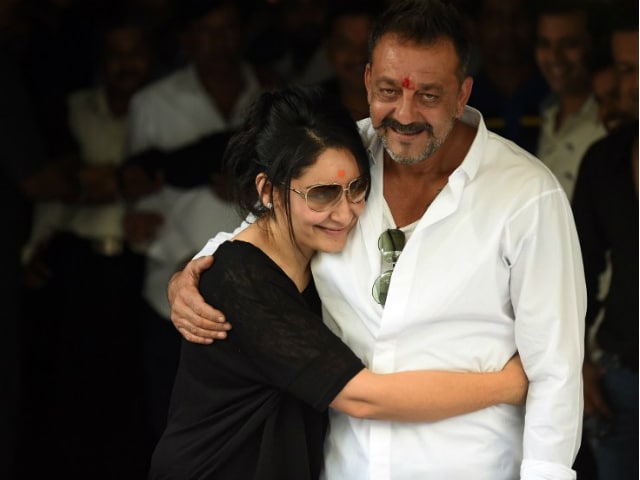 Actor Rishi Kapoor was one of the first ones to welcome Munnabhai back on Twitter, who walked out a free man after spending 42-months in prison. "Welcome back to the grind! Make some memorable movies now!" Rishi Kapoor posted on Twitter. The Khalnayak actor left for Mumbai after his release

Actor Sanjay Dutt has been released from Pune's Yerwada Jail after serving five-year sentence in a case related to the 1993 Mumbai blasts on Thursday. Tweets from his colleagues and friends from Bollywood poured in for Munnabhai, who walked out a free man after spending 42-months in prison. (See Pics: Sanjay Dutt's Aww-Some Moments With Shahraan and Iqra)
Industry veteran Rishi Kapoor, who has co-starred with the 56-year-old actor in movies like Agneepath, Pyaar Mein Twist and Raju Chacha, was one of the first ones to welcome him on Twitter:


Welcome back to the grind! Make some memorable movies now! pic.twitter.com/xjubwdlPGG

Actress Juhi Chawla, who featured with Mr Dutt in movies like Son of Sardaar and Safari also wrote:

Mahesh Bhatt, who directed Mr Dutt in 2986 movie Naam, shared a dialogue from the movie:

Paying for one's mistakes is the kind of stuff heroes are made of. Welcome back, Munnabhai.

Filmmaker Sajid Khan too had a message for Baba:

Saala Khadoos actor R Madhavan also tweeted for his 'brother'. He wrote: "My brother is backkkkkk."
Meanwhile, actress Shilpa Shetty and her businessman husband Raj Kundra, met the Dus actor in Mumbai, and shared this picture on Instagram:


Our Gang, HE's BACK ,the Rockstar himself our darling Sanju, @duttsanjay Freedom at last!U deserve all the happiness after those hard times. God is kind. #freedom #unconditional #friendship #patience

A day before Munnabhai's release, Trishala, his daughter from first wife Richa Sharma, had tweeted about her excitement:

The Khalnayak actor, who was last seen in Aamir Khan's PK, reached Mumbai on board a chartered flight after his release on Thursday. (See Pics: Munnabhai Goes Home: Sanjay Dutt Leaves Jail After 42 Months)