Sanjay Dutt mobbed as he reaches Mumbai court to surrender 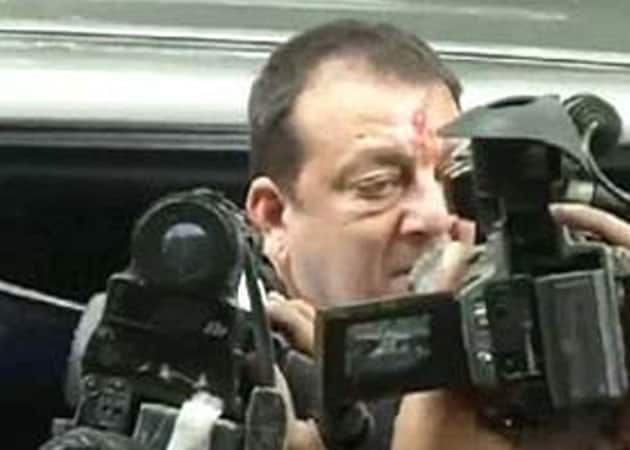 Sanjay Dutt, in a white kurta and jeans and with a red tilak on his forehead, has surrendered at a Mumbai court.

Sanjay Dutt, in a white kurta and jeans and with a red tilak on his forehead, has surrendered at a Mumbai court. There was chaos at the court as hundreds of people, including cameramen, crowded his car. The actor was able to get out and make his way into the courtroom only after about 20 minutes and much difficulty.
The actor left his Bandra home on Thursday afternoon, holding wife Manyata's hand, and, accompanied by family and friends, visited the famous Siddhivinayak temple on his way to court. All through the morning many members of the film fraternity, which has stood steadfast by the actor, visited him.
Read: As Sanjay Dutt braces for prison life, Bollywood friends visit
At the trial court, Mr Dutt will be taken into custody and sent first to Arthur Road Jail in Mumbai, where paperwork will be completed. He is then expected to be moved to Pune's Yerawada jail to complete his prison term of five years.
The Supreme Court had in March upheld Mr Dutt's conviction in the 1993 Mumbai blasts case for illegal possession of weapons, including an AK 56 rifle. The court reduced a trial court sentence of six years to five years and ordered the actor to serve 42 months in jail. He has already served 18 months 20 years ago, at the Yerawada jail.
The police and jail authorities have promised adequate security for Mr Dutt, who had claimed this week that he had recieved threats from "fundamentalist groups". The celebrity convict is expected to be lodged in what is known as the "Anda cell" at the Pune jail, which is egg-shaped. Half of it is sunk into the ground and is considered one the most secure cells in the prison.
Read: Yerawada jail says no special arrangements for Sanjay Dutt
The 56 days since the Supreme Court upheld his conviction on March 21 have been dramatic. After the verdict, a stunned Dutt appeared with folded hands and bowed head and wept on camera saying he would not appeal against the order.
As the date for his surrender drew closer, however, the actor appealed that he be given six months more to complete his seven films on the floor since it affected the livelihood of many people. The court gave him a month instead to wrap up all work. That month ends today.
Sanjay Dutt has been convicted and sentenced for illegally possessing a 9 mm pistol and an AK-56 rifle that were part of a consignment of weapons and explosives brought to India for coordinated serial blasts that killed 257 people and injured over 700 in 1993.
Two men, Keri Adajania and Yusuf Nullwala, who destroyed the AK-56 rifle, will also surrender with Mr Dutt today.