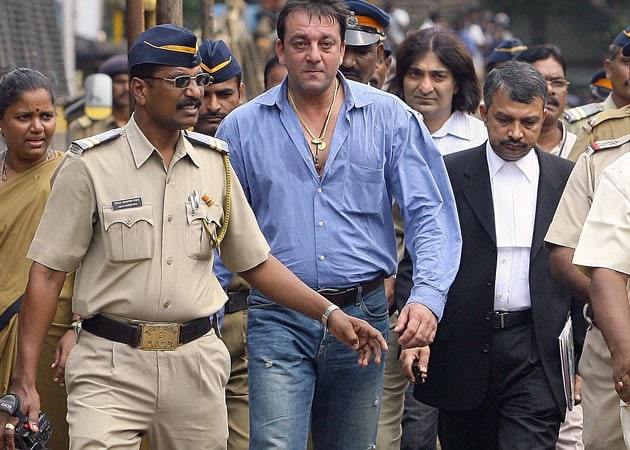 Sanjay Dutt surrendered before the TADA court on May 16, 2013.

Actor Sanjay Dutt, sent to the Arthur Road Central jail here, spent a restless night reading spiritual books, while his lawyer today requested the TADA court to shift him from the high-security egg-shaped cell where he felt suffocated.

Actor Sanjay Dutt, sent to the Arthur Road Central jail here, spent a restless night reading spiritual books, while his lawyer today requested the TADA court to shift him from the high-security egg-shaped cell where he felt suffocated.
Dutt, whose conviction in 1993 Mumbai blasts case was upheld by the Supreme Court in March this year, surrendered before the TADA court here yesterday.
"The 'anda' (egg-shaped) cell does not have enough light and Dutt felt suffocated due to insufficient ventilation," his lawyer Rizwan Merchant told the TADA court this morning.
Read: Sanjay Dutt to get home-cooked food in jail
Merchant further said that the egg-shaped cell was generally used to keep the hardened criminals or those arrested on terrorism-related charges. Dutt, he said, was not convicted under TADA, and was not a terrorist.
Dutt had been sentenced under Arms Act and should be kept in barracks with other prisoners instead of segregating him, advocate Merchant said.
Judge G A Sanap asked him to file a written application so that he could pass an order after hearing the prosecution.
Merchant later told reporters that he will seek instructions from Dutt; if the actor was shifted to Pune's Yerwada prison, he need not file the application.
A jail official, meanwhile, said 53-year-old Dutt spent the night restless, reading religious books. He did some exercises in the morning.
Dutt has got permission to carry with him Bhagwad Gita, Ramayan and Hanuman Chalisa.
In which prison Dutt would serve his sentence was yet to be decided, said Additional Director General of Police (Prisons) Meera Borwankar.
Another officer told PTI that prison department was gathering information such as number of convicts, security conditions and presence of inmates linked to underworld at jails in Taloja (Navi Mumbai), Yerwada (Pune), Thane, Nagpur and Nashik.
"We will go through this information and then take a call on whether to shift him. If things permit, he may be kept in Arthur Road Jail. However, the chances of he being shifted to Yerwada appear more bright," the officer added.
The last time the actor was at Yerwada Jail (following conviction by TADA court) he had undertaken the job of making chairs. As a convict, he can opt for carpentry, weaving, agriculture, or bakery work, as he will have to put in "hard labour", the jail officer said.
His options depend on which prison he is lodged in, as jails have different industries.
Dutt has already spent 18 months in jail after his arrest in April 1993, and has three-and-half years to serve. The Supreme Court had reduced his sentence from six years to five years.
Meanwhile, a lawyer today moved the TADA Court seeking "security" for Dutt inside the prison, citing instances of attacks by inmates. However, the court rejected his petition saying that the lawyer, H Holmagi, had no 'locus standi' (he had not been engaged by Dutt). "Sanjay Dutt is capable of protecting himself and his family," judge Sanap said, ticking off the lawyer.
The TADA court also issued non-bailable warrants against two other convicts on a plea made by prosecutor Deepak Salvi as they had failed to surrender within the deadline set by the Supreme Court.
Sharif (Dada) Parkar, who is over 80 years old and 75-year-old Zebunisa Kazi moved separate petitions today seeking more time to surrender. But the court turned down their pleas and issued warrants.
Parkar had been hospitalised following chest pain and doctors have advised him angioplasty procedure, his lawyer Farhana Shah said, while Kazi's lawyer said she had been advised to take certain medical tests and needed time till Monday to surrender.
Parkar was found guilty of organising landing of arms and RDX in Raigad district prior to the serial blasts. Kazi was convicted for allowing co-accused to keep weapons at her house for sometime.