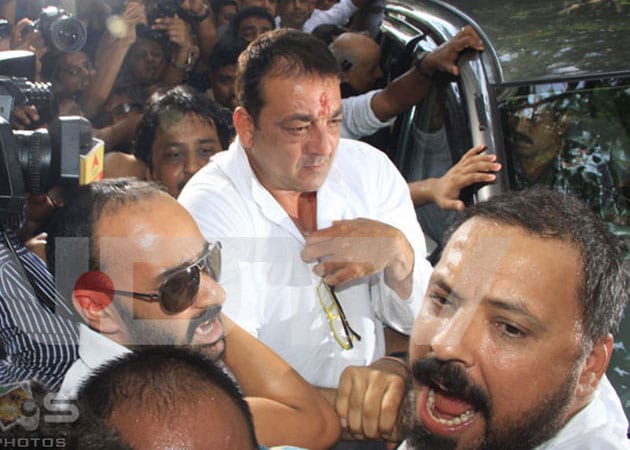 Almost a week after he surrendered, actor Sanjay Dutt was quietly shifted out of Mumbai's Arthur Road Jail and sent to Pune's Yerwada prison late last night. He will spend the next 42 months here to complete his jail term. (See case timeline)
The 53-year-old filmstar, who has been convicted in the 1993 Mumbai blasts case for illegal possession of weapons, is no stranger to the Pune prison. He has served time twice here. But unlike the last two times, he is a convict now and not an under-trial. The actor will hence have to wear jail uniform this time; he will be allotted a 'qaidi' or prisoner number soon, which will be prefixed with letter 'C' symbolizing that he is a convict. (Read: Sanjay Dutt: From Rocky to Munnabhai)
The actor is expected to be lodged in what is known as the "Anda cell" at the Pune jail, which is egg-shaped. Half of it is sunk into the ground and is considered one the most secure cells in the prison.
The court has allowed the celebrity convict to get home-made food and has also agreed to his appeal to be provided with a thin mattress and pillow and medicines for a month. But it rejected Mr Dutt's request to be allowed to smoke electronic cigarettes in prison.
The last time Sanjay Dutt was at Yerawada Jail, he had taken up carpentry. This time, he is expected to do labour work. He is entitled to get a monthly allowance of Rs. 1500 rupees from his family to buy essentials from jail canteen. He can meet visitors once a month for just 20 minutes.
The actor was brought to Arthur Road Jail on May 16, hours after he surrendered at a special TADA court amid much chaos. Hundreds of people, including cameramen, crowded his car. He was able to get out and make his way into the courtroom only after about 20 minutes and much difficulty.
In March this year, the Supreme Court upheld his conviction but reduced a trial court sentence of six years to five years. Mr Dutt now has to serve 42 months in jail as he has already served 18 months 20 years ago, part of it at the Yerawada Jail.