Sanjay Dutt Walks Out Of Jail, Says 'I Am Not A Terrorist' 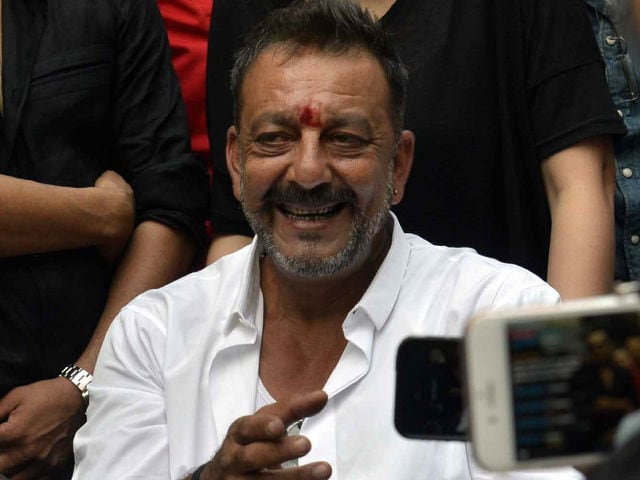 "I waited for this day of azadi (freedom) for 23 years. I am not a terrorist. I was in jail under the Arms Act. It is a request, please don't call me a 1993 Bombay blast convict," said Sanjay Dutt, who walked out of jail on February 25 after completing his sentence in an arms case related to the 1993 Mumbai blasts

Actor Sanjay Dutt kissed the ground and saluted the flag as he walked out of jail this morning after completing his sentence in an arms case related to the 1993 Mumbai blasts.
"I waited for this day of azadi (freedom) for 23 years," he told reporters much later at his home.
"I am not a terrorist. I was in jail under the Arms Act. It is a request, please don't call me a 1993 Bombay blast convict," he appealed at the press conference.
Hefting a large bag as he emerged from Pune's Yerwada jail at around 8.45 am, the 56-year-old actor walked to his wife Maanayata, twins Iqra and Shahraan and filmmaker Rajkumar Hirani, his friend.
To his 'best half' Maanayata - who he said had suffered the most - he handed over the Rs. 440 he had earned making paper bags in prison.
The actor was driven away in a white SUV to the airport, from where he took a chartered plane.
"There is no easy walk to freedom, my friends," he said, smiling, to media personnel at the Pune airport. (In Pics: Sanjay Dutt's Aww-Some Moments With Shahraan and Iqra)
After reaching Mumbai, Mr Dutt headed straight to the famous Siddhivinayak temple to offer prayers to Lord Ganesha. He then went to his mother Nargis Dutt's grave in Marine Lines before heading to his Pali Hill home.
Image courtesy: AFP
Among the posters welcoming him home was one from his family that greeted "Papa" and "Uncle" and "Bro".
"I miss my father today," he said.
Sanjay Dutt, the star of films like Khalnayak and the blockbuster Munnabhai series, was released a little over three months ahead of time on grounds of good behaviour.
Image courtesy: PTI
On Monday, the Bombay High Court will hear a petition challenging his early release. It also alleges that the actor enjoyed preferential treatment in jail.
The actor's frequent breaks from jail had been criticised as evidence of VIP treatment. Between May 2013 and 2014, Mr Dutt spent over 118 days out of prison. (Also Read: Sanjay Dutt Comes Home, Bollywood Tweets 'Welcome Back')
In 2007, Sanjay Dutt was found guilty of illegally keeping an AK-56 rifle and a pistol acquired from those involved in the 1993 serial blasts in Mumbai that killed 257 people and injured hundreds. The actor served 18 months but then was out on bail, fighting the conviction until a court in March 2013 ordered him back to jail.
Mr Dutt, who was cleared of conspiracy charges in connection with the blasts, had claimed that he had the weapons for protection during the riots that erupted after the blasts.