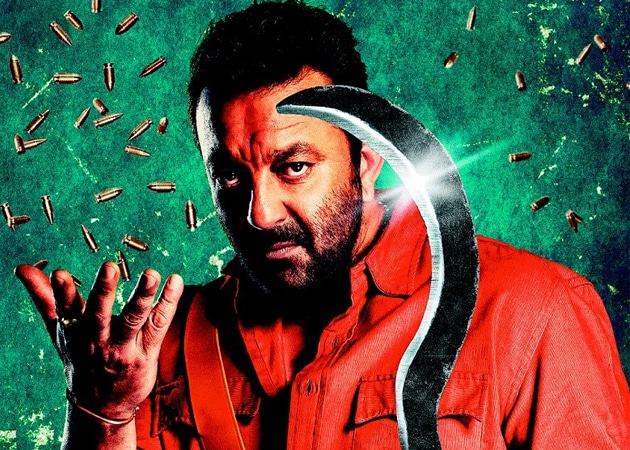 Policegiri is set to release on July 5

South director K S Ravikumar, who has teamed up with Sanjay Dutt for his Hindi film debut Policegiri, says the actor wants the film to do a business of Rs 100 crore.

Renowned south director K S Ravikumar, who has teamed up with Sanjay Dutt for his Hindi film debut Policegiri, says the actor wants the film to do a business of Rs 100 crore.
Sanjay Dutt, 53, is currently serving his sentence in Pune's Yerwada jail in connection with 1993 Mumbai serial blasts case. "He was happy with the way the film shaped up. He said he will be happy to know that the film did well. He had told all of us that he would be happy if the film [makes] Rs 100 crore [of business]," director K S Ravikumar told PTI while expressing his sadness that Sanjay Dutt was not there with them now.
Praising Sanjay Dutt for his acting skills, Ravikumar said, "He is a great actor and a very good performer. He was jolly on the sets, he was at times moody. But, he was very much into the character. He used to give the shot in one take. He is a director's artist." Even though Sanjay Dutt is quite an experienced actor in Bollywood, he never questioned the vision of the director, who is making his debut in Hindi cinema.
In March this year, the Supreme Court upheld Sanjay Dutt's conviction in the 1993 serial blasts case for illegally possessing firearms and sentenced him to five years' imprisonment. He is currently serving the remaining three years of his term. The apex court gave him time to surrender to complete his film projects, as huge money had been invested in them by the producers. "We did not just wind up the film. After the judgement came, we were left with 10 to 15 per cent of the shoot. He tried to give maximum time for the film. We have not shortened or cut anything from the film," Ravikumar said.
Policegiri is an action film which will see Sanjay Dutt playing a police officer and Prachi Desai as his love interest. It is the remake of south movie Saamy. "Cop films are doing well in south as well. I am a commercial director, we have made changes according to Hindi film audience. We have confidence that the film will do well," Ravikumar said. The makers insist that the film, slated for release on July 5, has "never seen before" action sequences.