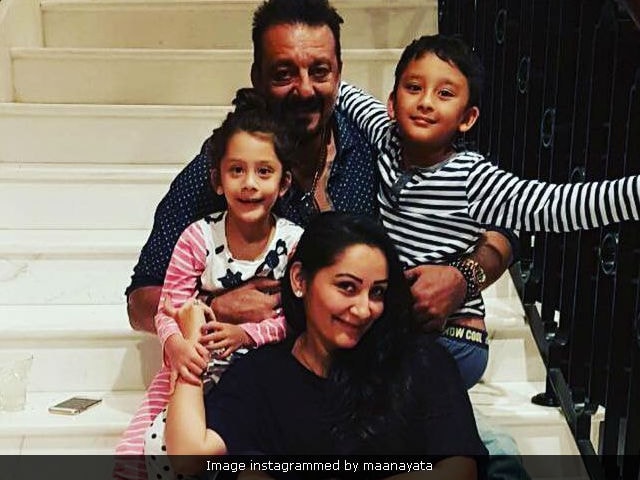 Sanjay Dutt with his family in Dubai. (Image courtesy: maanayata)

Actor Sanjay Dutt has stated filming his comeback film Bhoomi in Agra, but before that the actor took his wife Maanyata and twins Shahraan and Iqra for a ride on the scooter (presumably a film prop) in the bylanes of Agra. Maanyata shared a picture of the quartet on Instagram and wrote: "Nothing compares to a simple ride on a scooter with the family.... exploring the lanes of agra.. (sic)." Shahraan and Iqra, both dressed in white, sport reflector glares while Maanyata wore a blur printed kurta with denims. Bhoomi is directed by Omung Kumar, the maker of National Award-winning film Mary Kom. It also stars Aditi Rao Hydari.
Here's what Maanyata posted on Instagram:

Sanjay Dutt shared the same picture and wrote: "Life is beautiful on a scooter with my family, shooting of bhoomi in Agra, my family with me (sic)."
Bhoomi went on floors two days back.
Bhoomi is Sanjay Dutt's first film since he was released from Yerwada jail after completing his term in connection with the 1993 Mumbai Blasts Case. In 2013, the Supreme Court sentenced him to five years of imprisonment and he was released last February. His films Policegiri, Zanjeer, Ungli and PK released while he was in jail.
Sanjay Dutt earlier told NDTV that Bhoomi is a perfect comeback film for him. He said, "I have been looking for scripts that went beyond my screen persona. I wanted to do something vulnerable yet powerful. Bhoomi is an emotional and sensitive drama that explores the relationship between a father and daughter."
Sanjay Dutt, 57, will also be seen in Rajkumar Hirani's third Munna Bhai. He has also signed up for directors Rohit Jugraj Chauhan' and Siddharth Anand's next.