Sanjay Dutt's Six-Year-Old Son Is A Football Fanatic. How Actor Deals With His Queries

Shahraan is already a fan of football and takes all his queries to his father, revealed a source 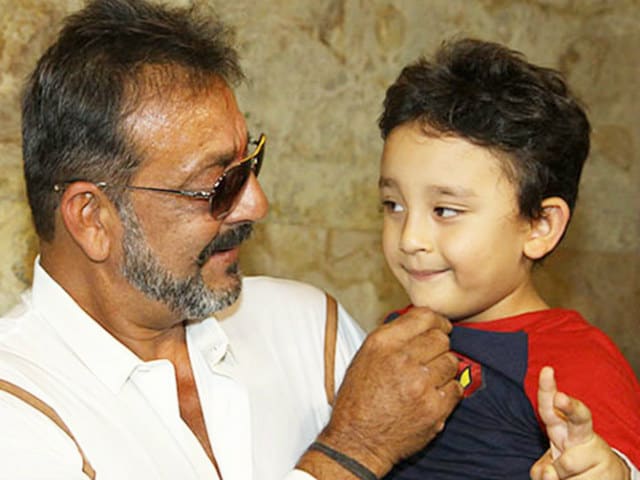 Actor Sanjay Dutt is currently busy with his comeback film Bhoomi and also has projects like Rajkumar Hirani's third in the series of Munna Bhai films, and films with directors Rohit Jugraj Chauhan and Siddharth Anand lined up. But what else that's keeping the 57-year-old actor busy are his football sessions with six-year-old old son Shahraan. Sanjay Dutt and Maanyata are parents to twins Shahraan and Iqra. A source close to the actor's family assured that the Khalnayak star ensures that his daily schedule has space for some family time. He regularly catches up with his children to cultivate their interests, the source added.
"Sanjay is particular about giving enough time to his kids. He usually chats with them about their interests and the things they love to do," the source said. "The kids, along with their parents, recently visited the Taj Mahal, Agra, Uttar Pradesh for the first time," added the source.
Shahraan is already a fan of football and takes all his queries to his father. "Shahraan, who loves playing football, has discussions with the actor about the game. He likes discussing various techniques and strategies while playing with his father. They also like to talk about their favourite players and clubs," the source said, adding that the Agneepath actor can always be spotted cheering for Shahraan at his football matches.
Recently, Sanjay was spotted during a family-packed scooter ride, when all the Dutts were on board one single scooter - Shahraan and Iqra in front while Maanyata rode pillion.

Sanjay Dutt's first day at shoot for Bhoomi was also special for his children, who fetched gold medals at the school sports.


Such a great day!!! Husband begins his first day of shoot today and my kids bring me gold medals in their school sports...glad made in time to Mumbai for this special day#3goldmedalseach #shahraandutt #iqradutt #dutts #greenhouse #backhome #love #grace #positivity #instafam #atheletes #winners #blessed #thankyougod #proudmommy

Bhoomi is Sanjay Dutt's first film since he was released from Yerwada jail after completing his term in connection with the 1993 Mumbai Blasts Case.
Earlier, the Munna Bhai actor opened up about the subject of his comeback film and told NDTV: "Bhoomi is an emotional and sensitive drama that explores the relationship between a father and daughter." Bhoomi also stars Aditi Rao Hydari as the daughter of Sanjay Dutt's character while Sharad Kelkar will feature as the antagonist.
Sanjay Dutt also has a daughter named Trishala Dutt with former wife Richa Sharma.