Sara Ali Khan will reportedly be seen with Hrithik Roshan in Karan Malhotra's film. She was earlier set to debut opposite Tiger Shroff in Student Of The Year Sara and Hrithik's film will be a dramedy.

Actor Saif Ali Khan's daughter Sara Ali Khan, 23, is all set for her big Bollywood break opposite actor Hrithik Roshan in director Karan Malhotra's next, reports Times of India. Sara's debut was previously planned opposite Tiger Shroff in Karan Johar's Student Of The Year 2. However, Sara's mother Amrita Singh, who is divorced from Saif Ali Khan, was reportedly not convinced that the film would make for a proper launch for Sara. And now, a source close to the project said that Sara Khan, 24, is gearing up for her first film with the 42-year-old Kaho Naa... Pyar Hai actor, which will be a comedy-drama.
"She is back on-board, but with a bigger and better project, after the differences have been ironed out. She will be the leading lady of Karan Malhotra's comedy film, a first-of-its-kind journey," a source revealed to Mirror, reports Times of India.
Sara Ali Khan, who recently graduated from Columbia University in New York, was last spotted at the Bachchan's Diwali party in an Abu Jani-Sandeep Khosla creation. Sara has often been spotted with her father and brother Ibrahim out for luncheons and friendly tennis matches. 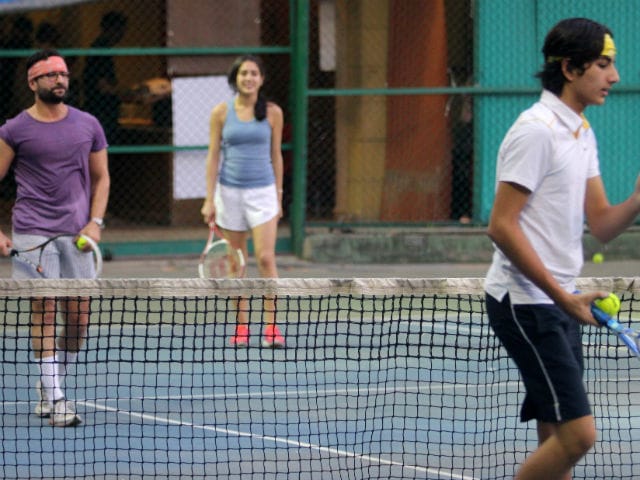 Saif previously told NDTV that Sara was interested in films: "Look at Soha (his sister). She has a degree from London School of Economics and she is now into movies. I think the girls in my family think this (Bollywood) is far more fun. Yes, perhaps it is."
Saif Ali Khan married Amrita Singh, 58, in 1991 and together they have two children - Sara and Ibrahim, 15. Saif and Ms Singh divorced in 2004. Saif married actress Kareena Kapoor Khan in 2012 and their first baby is expected to arrive this week.
Meanwhile, Karan Malhotra belongs to camp Dharma Productions. Karan assisted KJo on My Name is Khan before debuting with the Agneepath remake with Hrithik in lead. He next directed Akshay Kumar, Sidharth Malhotra, Jacqueline Fernandez and Jackie Shroff in Brothers. KJo had also picked Karan for his ambitious project Shuddhi, an adaptation of Amish Tripathi's Immortals of Meluha, which was eventually shelved. Apart from working with KJo, Karan previously assisted Ashutosh Gowariker on Jodhaa Akbar and Shirish Kunder on Jaan-E-Mann. It is not confirmed if Sara's film will also be produced by Karan Johar.
Best of luck, Sara Ali Khan.