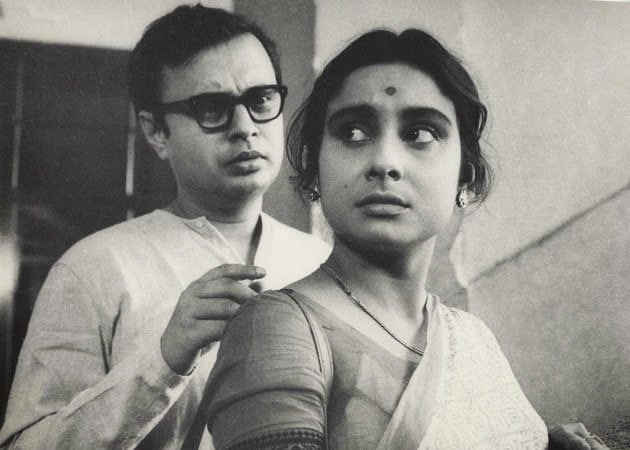 A still from the movie Mahanagar

Satyajit Ray's 1963 classic Mahanagar -- a sensitive portrayal of a housewife who challenges her traditionalist family by getting a job, has been digitally restored and is set to be re-released after 50 years.

Satyajit Ray's 1963 classic Mahanagar -- a sensitive portrayal of a housewife who challenges her traditionalist family by getting a job, has been digitally restored and is set to be re-released after 50 years.
The film, starring Madhabi Mukherjee in the lead, charts the emerging class of women who became bread winners to support life in a big city, despite facing resistance from the traditional structure. The film also marked the debut of actor Jaya Bachchan.
The Kolkata-set movie is being re-released in eight cities, including Delhi, Mumbai, Kolkata and Chennai on April 18 through PVR's Director's Rare.
Mahanagar has been restored by Kamal Bansal of RDB, whose father R. D. Bansal was Mr. Ray's long-time producer.
Mr. Ray won the Silver Bear at the 14th Berlin International Film Festival for Mahanagar in 1964. R.D. Bansal's granddaughter Varsha said RDB has restored all the six Ray films that were produced by them.
"We first thought about restoring the films in 2011. There was a Ray festival in Locarno at that time and there was a huge audience but the prints were not in a good condition. There were scratches and the colour had changed. The negatives kept on the analogue print were in a bad shape," Ms. Varsha told PTI. The restoration work on each film cost around Rs. 20 lakh, she added.
"We started the process in 2012 with about 300 technicians on all the six films. It is a frame-by-fame restoration and any mark or tear was corrected manually. Mahanagar will be released first, followed by Charulata, Nayak, Kapurush, Mahapurush and Jai Baba Felunath. RDB has tied up with Criterian, an American company, which has come out with the DVD and Blu-ray.