Shabana Azmi: Javed and me give each other enough space 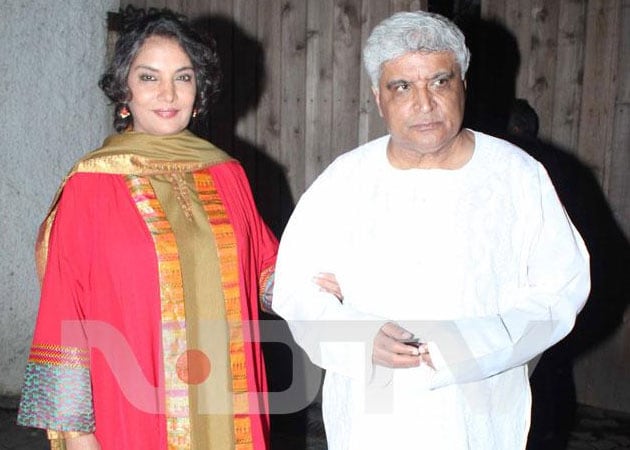 Shabana says her marriage with Javed Akhtar is based on respect

Industry veteran Shabana Azmi and her lyricist-husband Javed Akhtar don't get much time to spend together owing to their busy schedules but the actress is grateful for their relationship.

Industry veteran Shabana Azmi and her lyricist-husband Javed Akhtar don't get much time to spend together owing to their busy schedules but the actress is grateful for their relationship.
"Javed saab writes all these romantic poems and people really come to me saying you are so lucky. And then I tell them that he doesn't have a single romantic bone in his body. And when they ask Javed saab about it he says, "listen when you are working in a circus, and you are a trapeze artist would you hang upside down in your own bed?," Shabana said in an interview here.
"We really respect each other. We give each other enough space too. It's truly a relationship which I am very grateful for," she added. She also reveals the two are very busy with their work most of the time and sometimes bump into each other at airports.
Ask her if she has picked up any learnings from the successful marriage of her parents, she says, "I have seen a very successful marriage there. They were very good partners. They also were very respectful of each other. My dad has had an influence on both my brother and me."
She would be seen next in the Indian adaptation of hit American show 24. It was purely due to her friendship with Anil Kapoor that she agreed to be part of this show. "Anil Kapoor and his wife have been dear friends for more than 30 years and we really are like family. I associate quality with Anil, I was very sure the Indian version of the show 24 will be of certain standard," she said. In this show, Shabana will be seen sporting short hair, wearing trousers with long kurtas. She plays the role of Abhilasha Grewal, head of the Anti-Terrorist Unit.
"She is no nonsense kind of a person. It was a character I hadn't played in film or theater so I thought it would be interesting thing to do. Its just a cameo, only nine days of work I had to do."
The senior actress feels 24 is different from the regular shows happening on television.
"The show already has a readymade audience that has watched 24 and has certain expectations from it. From the look and the promos of the show one can see quality work, people will like it. I feel when any good product becomes successful then it is sets a benchmark for all the other shows that come," she said.
She reveals she has been offered lots of talk shows in the past on television but was not able to do it because of lack of time.