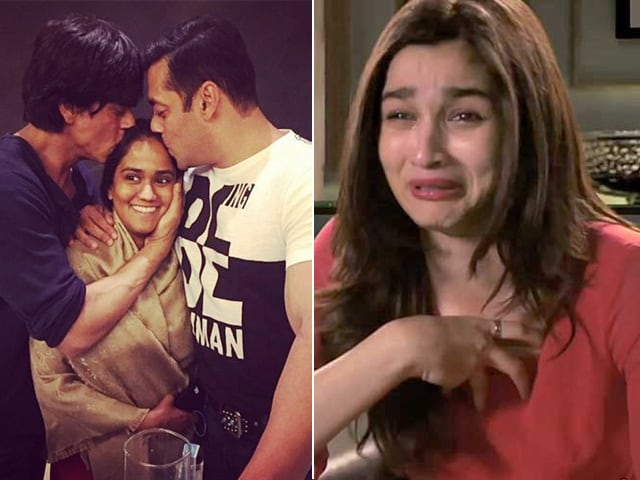 Celebrities who made headlines in 2014

While SRK-Salman made headlines by putting an end to their six-year-long feud this year, Aamir Khan grabbed eyeballs with his infamous PK poster.

In 2014, celebrities made up, took off their clothes, got married, slammed the press and stood up for themselves. Not all at once, though. Here's who did what.

In a development that holds deep meaning for Bollywood, superstars Shah Rukh Khan and Salman Khan ended a six-year-long feud that had begun at actress Katrina Kaif's birthday party in 2008 and conducted with public bitterness. And they did it in the filmiest manner possible - at a pre-wedding function for Salman's sister Arpita, the Karan Arjun Khans sealed their mended friendship with a kiss for the bride. The war looked like it was coming to an end at successive iftaar parties and an award show where SRK and Salman were photographed hugging each other. But hostilities were always renewed, until Salman personally invited SRK to Arpita's wedding. And that, as they say, was that. All three Super Khans - Shah Rukh, Salman and Aamir - appeared together at celebrations for the 25th year of TV show Aap Ki Adaalat, something that was not to be thought of during the dark years of the feud.

2. For Years, Nothing. Then, Arrested For Prostitution

Actress Shweta Basu Prasad was all of 11 years when she won a National Award for her role in Makdee. A few years of film and TV appearances followed and then she slid silently into obscurity. Until October this year when she was arrested from a Hyderabad hotel on charges of prostitution. Shweta spent some months in a remand home before being allowed to go home. She was later cleared of all charges and wrote a strong letter addressed to the press in which she denied ever having made a statement about being forced into the sex trade by bankruptcy and demanding proof that there had been 'businessmen' in the hotel room with her. Several showbiz voices were raised in support of Shweta and there has been talk of a role for her in South filmmaker Dharma Teja's next movie.

3. The Girl Who Played With Fire

This year, actress Deepika Padukone went where many fear to tread. She collided head on with a leading daily after they tweeted a top shot of her captioned 'OMG: Deepika's cleavage show.' Deepika returned fire immediately. Yes, I'm and woman and I have cleavage, she tweeted back, outraged. In the overwhelming outpouring of support for her that followed, the daily deleted the offending tweet. Shah Rukh Khan told the press that few from Bollywood would have found the courage to do what Deepika did.

Director Vishal Bhardwaj's Haider, an adaptation of Shakespeare's Hamlet set in Kashmir, instantly left its audience divided over the portrayal of life in the insurgency-ridden Valley of the '90s. It was criticised mainly for its depiction of the Indian Army's handling of suspected militants. There were calls for boycotting the intensely political film, described by some as anti--national. Other voices came out strongly in Haider's favour, urging that it be treated as a piece of artistic fiction rather than a faithful documenting of a troubled and uncertain history. The grumbling eventually died down and Haider's actors - Shahid Kapoor and Tabu - have already won awards for their performances in what was a difficult and compelling film.

5. How Many Celebs Does it Take to Make One Great Photo?

The answers is - there's never too many. At the Oscars, host Ellen Degeneres press-ganged every star within arm's reach into posing for a group selfie that aimed at 'breaking the internet.' It did, too, as Twitter crashed very briefly. Unsurprising given the number of famous faces in the photo - Brad and Angelina, Julia Roberts, Meryly Streep, Bradley Cooper, Jennifer Lawrence, Lupita Nyong'o Kevin Spacey, Jared Leto and Channing Tatum. The selfie reportedly became the most-retweeted picture of all time, receiving 871,000 retweets within an hour and 3.3 million retweets overall.

Actor Salman Khan has had an eventful 2014. He has been in court in connection with the poaching case and the hit-and-run case in which he was identified by one witness as emerging from the right side - the driver's side - of the car. He also starred in the blockbuster Kick and the not-so-blockbuster Jai Ho. He made his very first appearance on Koffee With Karan and made instant headlines by declaring himself 'a 40-year-old virgin.' He almost didn't host Bigg Boss - but then he did. He also decided not to host it any longer. He invited the President and the Prime Minister to his sister's wedding. AND he made up with sworn enemy Shah Rukh Khan. He's going to be 50 next year but shows no sign of slowing down.

7. Almost All of Aamir

Actor Aamir Khan took of his clothes for a film which created the sort of frenzy that going naked in public would be expected to create. In the first poster of his film PK, Aamir appeared almost-nude save for a strategically placed transistor. It left almost everybody reeling, either with delight or outrage. Many were thrilled. Ithers begged him to cover up. One gentleman filed a complaint in court, accusing Aamir and the film of being 'vulgar and obscene.' Subsequent posters featured him with clothes on and PK released in December to rave reviews and blockbuster collections.

Actress Anushka Sharma, who co-starred in PK, was accused of having her lips surgically altered after she appeared on Koffee With Karan looking extra pouty. As jokes about her odd-shaped mouth prompted laughter on social media, Anushka wrote a defense of herself in which she denied having plastic surgery but did admit to having used a 'temporary lip-enhancing tool' for her role in Bombay Velvet. Anushka also came clean about dating cricketer Virat Kohli and is reportedly moving in with him soon.

9. Keeping Up With Kim Kardashian

Reality TV star Kim Kardashian, who knows just how to keepp herself in the headlines, married rapper Kanye West this year. The third-time bride grabbed eyeballs in her bib-fronted, lace-sleeved Givenchy gown. Kim and Kanye's wedding picture is reportedly the most 'liked' photo of 2014. Kim also featured semi-nude on a magazine cover - another celebrity bid to 'break the internet' - and only just missed appearing on Bigg Boss, with her visit to India being cancelled over 'visa issues' at the last minute.

10. Alia Bhatt, Genius of the Year

Actress Alia Bhatt's lack of even the most basic general knowledge - who's the President of India? she didn't know - made her the butt of jokes on Twitter and Facebook, and in drawing room conversations as well. However, Alia had the last laugh after she starred in a spoof video titled Alia Bhatt: Genius of the Year, sarcastically flexing mental muscle on a fictional version of Koffee With Karan. The video went viral and Alia was transformed from object of ridicule into social media darling. She was also praised for her legit film performances in Highway, 2 States and Humpty Sharma Ki Dulhania.