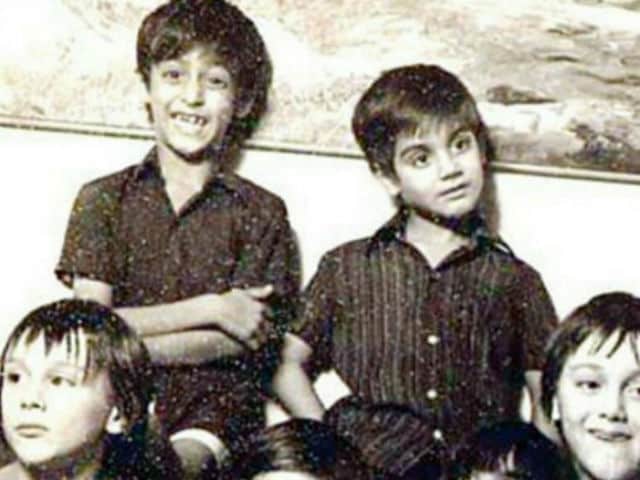 Internet never forgets - and it doesn't let you either. We've been mining social media for memories and struck gold with a bunch of old (very old) photos of Bollywood. From Shah Rukh Khan at Kajol's mehendi ceremony to Big B and Jayaji's marriage, this collection of old Bollywood pictures will certainly make your week

The thing about the Internet is that it never forgets - and it doesn't let you either. Remember how your favourite actors looked many years ago? We've been mining social media for memories and struck gold with a bunch of old (very old) photos of Bollywood from way back then. From Shah Rukh Khan and Gauri at Kajol's mehendi ceremony to Salman Khan and brothers as kids, this celebrity album will make your week. You're welcome.
Mehendi Laga Ke Rakhna
Kajol married actor Ajay Devgn in 1999, after having co-starred with Shah Rukh Khan in Baazigar, Dilwale Dulhania Le Jayenge, Karan Arjun and Kuch Kuch Hota Hai. This picture, which was taken during her mehendi ceremony, features SRK, his wife Gauri and their toddler son Aryan.

Shah Rukh and Son
From a time when Shah Rukh was very, very young and Aryan just a babe in arms.

SRK Salman Aishwarya = One Epic Photo
It's safe to say that this picture will never be recreated.


Happy birthday to Aishwarya & Shahrukh ! // If you look at the full picture in 2010 (Hrithik is there too but he's cropped out) it would've been a really rare picture since Salman had a little problem with all 3 of them salmankhan #aishwaryarai #aishwaryaraibachchan #shahrukhkhan #srk #bollywood

Spot Bhaijaan Here
Salman Khan with his brothers Arbaaz and Sohail and sister Alvira. We are not going to tell you who's who. Spot Salman!

The 'Superstar' Was a Family Man
Rajesh Khanna, the actor for whom the term 'superstar' was coined, was photographed with his wife Dimple Kapadia and their daughters, Twinkle and Rinke. Dimple Kapadia looks drop dead gorgeous here.

A Beauty Queen-in-the-Making
A young Aishwarya Rai with her parents Krishnaraj and Brinda Rai.

'Beauty Has No Rivalry'
In 1994, Aishwarya lost the Miss India title to Sushmita Sen. Both went on to win the Miss World and Miss Universe pageants. Gossip insisted they were rivals, they've been denying it all these years.


! #AishwaryaRai and #SushmitaSen togther after 20 years ! !

The Bro-Code: Ajay and Akshay
Ajay Devgn and Akshay Kumar, who have worked together in films like Suhaag and Khakee, share a light moment.

Sister Act
This picture of Alia Bhatt and her sister Shaheen is simply adorable.


#Poser ... Started young never lose yourself ! P.S - outfit made by my mother #Blessed

Mr and Mrs Bachchan
Amitabh Bachchan and Jayaji got married in 1973. They had already appeared together in Zanjeer.

Veeru Aur Basanti Ki Shaadi
Hema Malini and Dharmendra's romance made headlines in the Seventies. The Sholay co-stars married in 1980, despite Dharmendra being already hitched.

Hum Do, Humare Do
Hema Malini and Dharmendra have two daughters, Esha and Ahana Deol, pictured here as young girls.

A Pretty Dilwali
Veteran actress Tanuja and her daughters Kajol and Tanisha look wonderful in this picture.


#Tanuja with her daughters #Kajol & #TanishaMukherjee

We Are Family
The real star of this picture is Karisma Kapoor, who poses with her sister Kareena and their mother Babita. Karisma looks simply glamorous with that red jacket and the hairdo.

Best Friends be Like Sanjay Dutt and Salman Khan
Salman Khan visited Sanjay Dutt while the latter was filming Mahaanta. Such a nice picture.

Happy Families
Sunil Dutt and his wife Nargis pose with their children Sanjay, Priya and Namrata. It doesn't get better than this.

Khamosh! Sona is Here
This picture of Sonakshi Sinha with her parents Shatrughan and Poonam Sinha will make you go 'Awwwww.' We can't get enough of those chubby cheeks.