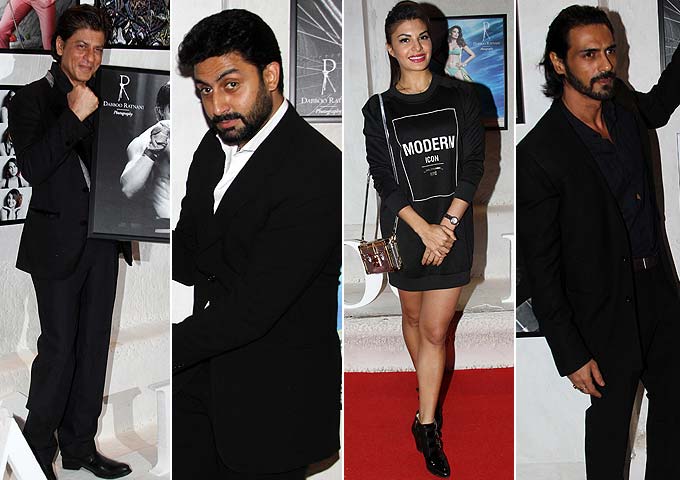 SRK, Abhishek, Arjun and Jacqueline spoke about the year that went by and their plans for 2015

It's tough to set a date with Bollywood and have the stars stick by it, but when you have a star-studded calendar for help it suddenly gets a lot easier, especially when you've been preparing for a Happy New Year for a while. For the stars of Happy New Year, Shah Rukh Khan and Abhishek Bachchan, the celebrations continued at Dabboo Ratnani's calendar launch.

For Abhishek in particular, 2015 will have plenty of milestone moments, not just for him but the women in his life as well. While wife Aishwarya Rai Bachchan prepares for her big comeback, daughter Aaradhya has a bigger challenge on hand - her first day of school on January 6.

Abhishek insisted, however, there would be no first day nerves, courtesy super mom Aishwarya.

The actor said, "2014 was a great year personally and professionally with Happy New Year, kabbadi and football and it ended on a high note. 2015 will be a great year for my wife. I'm dying to see her on the big screen again."

"Ash is the best mother you can ask for. Her secret to looking stunning is that she remains happy. She's a very positive person and is a great source of strength for the family," added the proud husband.

On the subject of proud parents, Abhishek's Happy New Year co-star Shah Rukh Khan couldn't help but beam ear to ear about his handsome son AbRam, who's possibly his father's closest competition when it comes to the cuteness quotient.

SRK, meanwhile, said he was gearing up like the rest of us to get back into shape after a little holiday indulgence. The Baadshah will begin shooting his next film, Raees, in March.

The actor also spoke about about how difficult it was to maintain the need to get back into shape over the next few months.

Talking about his photoshoot with Dabboo, SRK said, "Dabboo ke sare pictures achche hote hain and he makes us look much better than we are. I called Dabboo at 3 am while shooting for Happy New Year to shoot this picture."

We also bumped into actors Arjun Rampal and Jacqueline Fernandez, who will be seen together in the film Roy. Arjun confided at the event,"I've been missing all the madness. Roy is great film which required a lot of patience and hard work. Fingers crossed so I hope people like it."

Jacqueline, meanwhile, revealed that 2014 was an emotional though great year for her. "There was a time I wasn't even getting work. Then Kick with Salman happened. My dreams came true. and that's what I discovered in 2014. I'm really excited about Roy. This is something that is very different for me. It's a very verbose film. I've pushed the envelope in terms of dialogue and performance. Working with Ranbir (Kapoor) was a great experience. He's such a chilled out guy that there's a sense of peace and calm on the sets," Jacqueline said.

Here's looking forward to 2015 with the stars.