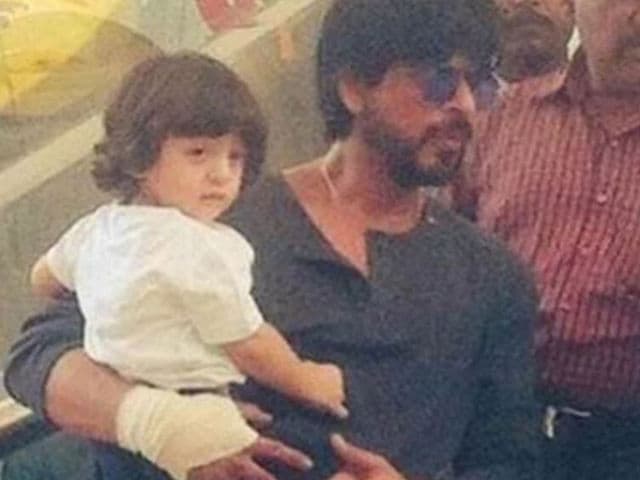 This image was posted on Instagram by SRK Fan Club.

Directed by Rahul Dholakia, Raees stars Shah Rukh Khan as a liquor baron in the dry state of Gujarat. Pakistani actress Mahira Khan will make her debut in Bollywood with this film and Nawazuddin Siddiqui co-stars. Raees is scheduled to hit screens on Eid 2016

Just two years old, AbRam Khan has already received a less than pleasant taste of the sort of superstardom his actor father Shah Rukh Khan commands. SRK, 50, has taken his youngest child with him to Gujarat where he is filming Raees and father and son were mobbed at Bhuj airport last week.
Footage tweeted by a fan club shows the actor navigating the short walk to his car, AbRam in his arms, as bodyguards and police struggle to keep the crowd at bay. (Also Read: Shah Rukh And AbRam on Raees Sets in Gujarat. This Pic is Super Cute)
AbRam probably didn't think of the experience as 'haha':


SRK and AbRam in Bhuj. @iamsrk He must be the youngest Indian to be mobbed like this haha pic.twitter.com/sEDDmjpGaB

SRK, dressed in a tee and denims, was spotted with the film crew at Bhuj airport again on Sunday: