Shah Rukh Khan And AbRam Went For A Late Night Walk Down The Beach. See Pic

Shah Rukh Khan tweeted a photo of himself and AbRam on their walk (and yes, he had his sunglasses on despite it being after dark) 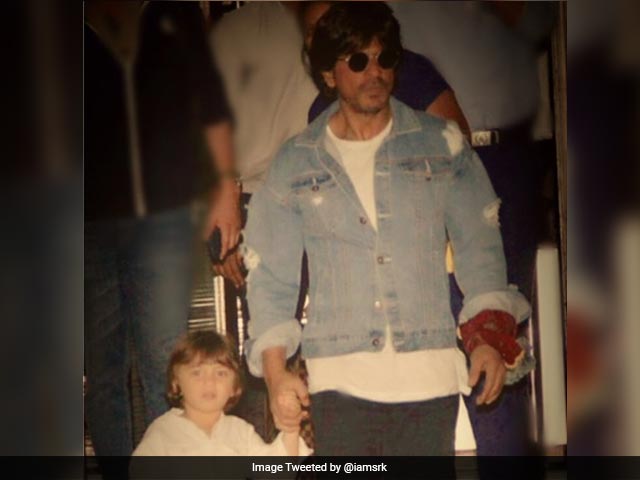 SRK and his three-year-old son AbRam went for a walk down Juhu Beach (courtesy: iamsrk)

Shah Rukh Khan appears to have slept in this morning and it's quite evident why. SRK, 51, and his three-year-old son AbRam went for a walk down Juhu Beach in Mumbai late last night, hand-in-hand. They built a sand castle - whether or not it lasts a 'life time' as SRK says it will, we've melted into a puddle of sentiment. Some 13 hours before writing this, SRK tweeted a photo of himself and AbRam on their walk (and yes, he had his sunglasses on despite it being after dark). Just before going to bed, the actor promised to post a 'romantic Valentine's message' when he woke up in the morning - no such message has been forthcoming but because the photo of AbRam is so adorable, we'll forgive SRK:


a late night walk along the juhu beach...hand in hand...& the sand castle we made will last a life time..we r sure. pic.twitter.com/x8jqCQ0wGY

He came home and tweeted this:


'Romance Like SRK' uff the irony of this trend!! Let me see if I can do a romantic Valentines msg for all of u when I wake up.

Still waiting, SRK.
AbRam is the youngest of SRK and Gauri's three children - his elder siblings are Aryan, 19, and Suhana, 16.
Shah Rukh Khan was last seen as a Gujarati liquor baron in Raees, which released on January 25. One of Bollywood's busiest actors, SRK usually juggles multiple film commitments and it has just been revealed that he will make a special appearance in Baahubali: The Conclusion, easily one of this year's biggest films. Mumbai Mirror reports that SRK's character will mediate in the conflict between Baahubali and Bhallala Deva, played by actors Prabhas and Rana Daggubati. Shah Rukh Khan is also working on a film with Anushka Sharma and is prepping for a project to be directed by Aanand L Rai, in which he will play a dwarf.