In 1991, a year before he made his Bollywood debut opposite Divya Bharti in Deewana, 25-year-old SRK played the lead role in an Easter-themed short directed by his theatre buddy Dinesh Lakhanpal 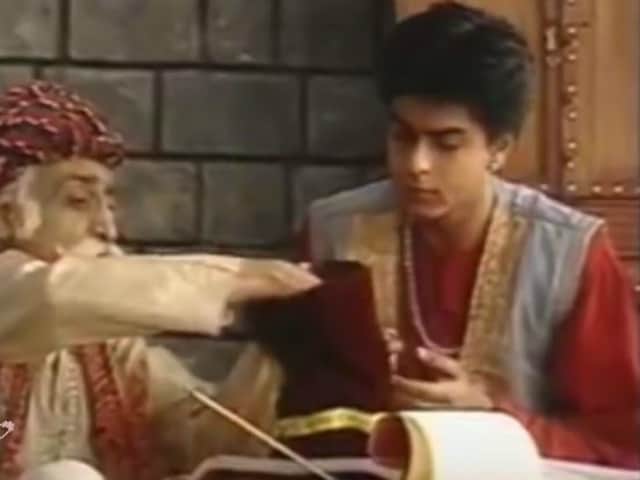 Shah Rukh Khan in a still from the video shared on YouTube.

A rich seam of gold has been discovered and mined on YouTube. An old short film starring a very young Shah Rukh Khan has been posted online and is now being circulated on social media.
In 1991, a year before he made his Bollywood debut opposite Divya Bharti in Deewana, 25-year-old SRK played the lead role in an Easter-themed short directed by Dinesh Lakhanpal. The description on the YouTube post claims that SRK was paid all of Rs 3,000 for the film, titled Mahaan Karz. Now a superstar commanding crores for each role, SRK himself might have forgotten this film, says the description.
Mahaan Karz deals with redemption and resurrection of moral imperative. SRK plays a young man employed by a local maharajah in his treasury. He wins the maharajah's trust but gambles away the contents of the coffers he is given charge of.
Shah Rukh Khan's isn't the only name of note in this forgotten film's credits. Binod Pradhan served as cinematographer and would later reunite with SRK on the films Raju Ban Gaya Gentleman and Devdas.
Watch the short film here:

Shah Rukh Khan's roots in TV and theatre throw up these treats every so often. Months ago, a clip of him anchoring a show on Doordarshan from way back when went viral.
Last seen in Fan, SRK, 50, has Dear Zindagi and Raees coming up.