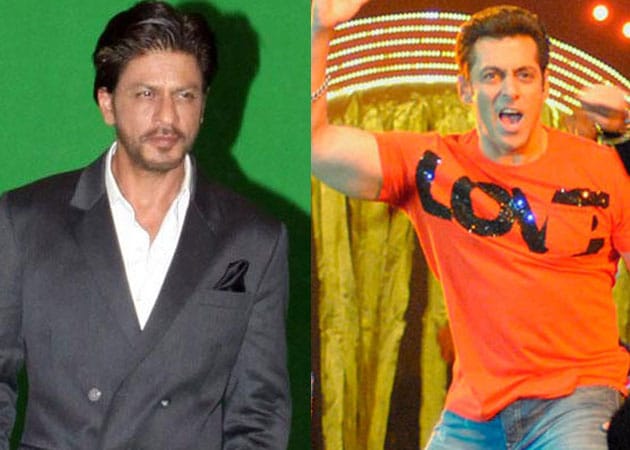 Shah Rukh and Salman have not been in the best of terms since long.

Salman Khan has found support about his controversial performance at Samajwadi Party chief Mulayam Singh Yadav's hometown from an unexpected quarter - fellow superstar Shah Rukh Khan, with who he has been conducting a feud of many years.

Salman Khan has found support about his controversial performance at Samajwadi Party chief Mulayam Singh Yadav's hometown from an unexpected quarter - fellow superstar Shah Rukh Khan, with who he has been conducting a feud of many years.
On Thursday, Shah Rukh told the press: "I'll just say two thing about this. One, I will not take a moral high ground and comment on the reasons of my colleagues working or taking on a job. I think it extremely unfair. We don't know the details as to why they have taken it or why they have done it, should they have done it. I can't take a moral high ground, I'm a performer myself. At times I've gone ahead and performed not even realising that there are issues surrounding the area I'm performing in."
Salman and other stars including actresses Madhuri Dixit and Alia Bhatt have been slammed for performing at the Saifai Mahotsav in Uttar Pradesh where thousands of riot victims are battling to survive in Muzaffarnagar.
Salman, who danced to the hit song Pandeyji Seeti from his film Dabangg 2, defended himself in a statement yesterday: "Whenever I visit a place for a performance or a promotion, I see it as an opportunity to help the locals in the areas of healthcare or education. In Etawah, Being Human, on behalf of all artists who performed yesterday, has committed to fund 200 paediatric heart surgeries in UP. There is already a wait list of 81 children who are being moved to Fortis Hospital Gurgaon and their surgeries will get done by the month end. Being Human is in touch with local NGOs and hospitals for their lists also."
Madhuri Dixit tweeted: As artists and celebrities, we believe in using our reach to help others through drawing attention to the needs of the day.
Alia Bhatt's father, director Mahesh, said it was his fault for not stopping his daughter from performing.
Uttar Pradesh chief minister Akhilesh Singh Yadav, Mulayam's son, remained unfazed about criticism over the Bollywood night and even gifted Rs one crore each to two films partly shot in Uttar Pradesh - Madhuri Dixit's Dedh Ishqiya and Saif Ali Khan's Bullett Raja.