Shah Rukh Khan on Karan Johar: "It could have been titled 'The Good Boy.' There are very few boys who sit down with their mothers and discuss teleshopping" 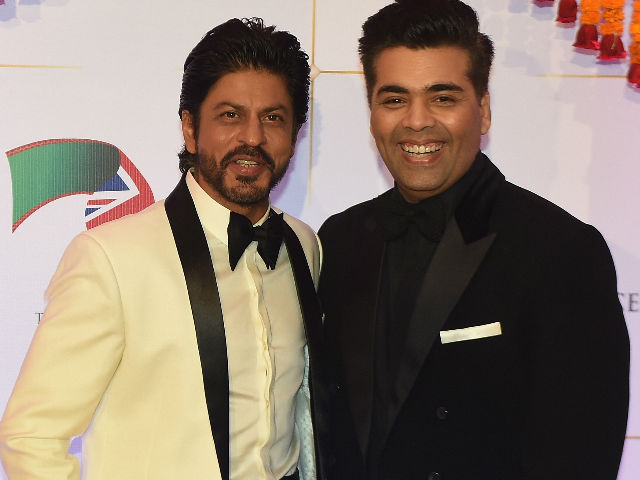 Shah Rukh Khan and Karan Johar have been friends and colleagues for over two decades (they co-starred in 1995 film Dilwale Dulhania Le Jayenge) so when SRK launched KJo's autobiography in Mumbai on Monday, he did it in grand style. SRK, 51, said the nicest things about his longtime buddy, including suggesting alternative titles to the book, which is called An Unsuitable Boy - Karan Johar, said, SRK, is a 'Good Boy,' a 'Sensitive Boy,' an 'Intelligent Boy,' and a 'Brave Boy.' SRK, who has starred in several films directed or produced by Karan Johar (the last being 2016 hit Dear Zindagi) said at the book launch: "Karan's autobiography could have been titled 'The Good Boy.' There are very few boys who sit down with their mothers and discuss teleshopping."
"He's an intelligent boy. Intelligent not in terms of general knowledge or Wikipedia but he understands things, he understands people. He walks into a room and knows what's happening. I think he has a gift from god that he can understand people," continued Shah Rukh Khan.
"I think he's a very sensitive boy. That's what the book could have been called. He can understand what's happening in your heart, what's happening in your soul," SRK added.
Finally, Karan Johar's book could have been titled 'The Brave Boy.' Shah Rukh Khan said: "I say this with vehemence and conviction because he's extremely different. And it's difficult being different." Karan Johar has spoken and written often about his sexuality and of abuse heaped on him by trolls on Twitter.
Watch the video here:

Karan Johar repaid Shah Rukh Khan's wonderful words with his own. "My love for him is beyond what he and I do professionally. It's a soul connect. I think we were meant to meet in this world," said the 44-year-old filmmaker. He also spoke about when he first met SRK. "I had never met somebody who was a young movie star, who was so loved at that time and everyone wanted him in their movies, who was this animated, this conversational... umm... what do I say, this real person. The fact that he respected my father so much meant the world to me," said Karan Johar. Yash Johar, who died in 2004, produced films that starred SRK, like Kuch Kuch Hota Hai, Kabhi Khushi Kabhie Gham and Kal Ho Naa Ho. The first two were directed by Karan Johar, the last was produced by him.
"There are ups and downs in many relationships but with Shah Rukh, there is deep love. There is no other way of communicating the respect and love I have for him. And I believe that ours will be a dynamic, will be a relationship and connect that will be forever. It's only my love for him has grown in the last two decades. Love for his family has been so consistent," KJo said.
SRK and wife Gauri both attended the launch of An Unsuitable Boy. Karan Johar last directed Shah Rukh Khan in 2010 film My Name Is Khan. SRK also made a guest appearance in the director's 2016 hit, Ae Dil Hai Mushkil. SRK is currently awaiting the release of his next film Raees.