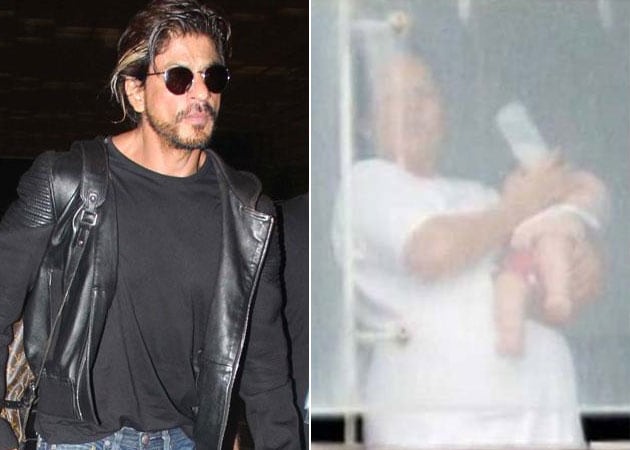 A very protective father, Shah Rukh Khan said that his youngest kid AbRam is not meant for flashbulbs.

Superstar Shah Rukh Khan says he does not want his son AbRam to be in the 'circus of public life' that he is a part of. Shah Rukh and Gauri's youngest child AbRam was born through surrogacy in May last year.

Superstar Shah Rukh Khan says he does not want his son AbRam to be in the 'circus of public life' that he is a part of. Shah Rukh and Gauri's youngest child AbRam was born through surrogacy in May last year.

"I am not overtly happy talking about him. He is my baby and nobody else's. You can come home and see him if I allow you to come in my house," Shah Rukh told PTI.

"He (AbRam) is not meant for flashbulbs. I don't want him to be a participant in this circus of public life that I am a part of. That is what I do, public life. The good, bad, ugly, goodness of media, the strangeness, I am part of it, not my children," the 48-year-old actor said.

AbRam was born at 34 weeks of pregnancy and had initially spent most of the time in hospital. "One of the only things that has made me uncomfortable in my career is you take on a child who is sick when he is born and make it an issue. I find it very disgraceful. I am a movie star, disgrace me but not my kids," he said.

Though his two elder children - Aryan and Suhana - pose with him for the media, but the doting father insists that this is because they are grown up and hang around with him.

"He (AbRam) is small. Don't want to allow that innocence in my line of work. Others do it good. I don't do it so I can't comment on others. One day if I feel like coming out I will. My baby, my life. I feel awkward when people say why I don't bring him in public. I will do what I feel like. You can't put picture because I don't like it, I feel uncomfortable," he said.

Shah Rukh is still unhappy recollecting the time when there were reports that a pre-natal sex determination test, which is banned in the country, had been conducted, following which the Mumbai civic body had sent a team to his residence to ascertain the facts which were turned away. The actor has repeatedly trashed the speculations.

"I did not like that fact when the media spoke about the surrogacy. I hated it. They said I had a sex determination test, which was rubbish. I am too educated to be indulging in this nonsense. He was suffering. He was ill and people were talking about sex determination just because he is the child of a famous movie star," he said.

"He will grow up one day and might read all this or may not read also. But it is very sad. Just because he is my child, it doesn't make him less or more than anyone else. A kid is a kid. He was unwell and there were cases going on. I feel awkward," he said.

However, Shah Rukh is very happy and feels blessed to have such a beautiful child.

"My office people make excuses to come home to see him. We have lot of good time. Now I have to do the kids shopping thing again. Whatever I did ten years ago," he said. Apart from his two other children, AbRam too visits Shah Rukh on film shoots sometimes.

"He comes on sets at times. Aryan and Suhana are studying so I can't take them away from school. AbRam is too small, but he has come to my shooting in Mumbai but not abroad," the actor said.

"My family doesn't like watching shooting. If I am shooting from 9 am to 9 pm they get bored. When I was shooting for Jab Tak Hai Jaan, they all were there in London, they were there in Dubai as well," he said.