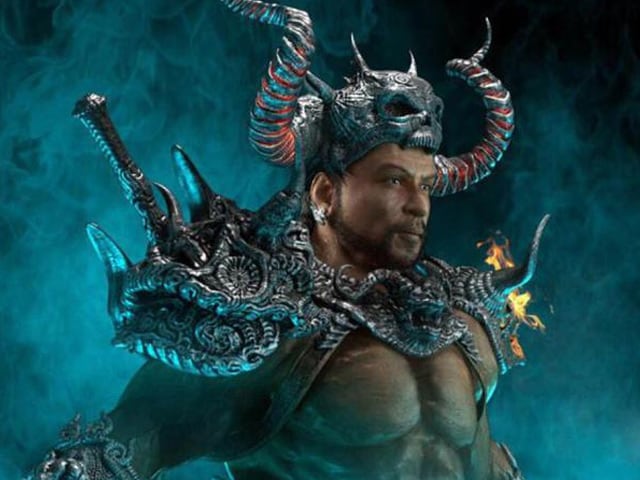 Bollywood superstar Shah Rukh Khan, who will be seen in the title role in upcoming graphic novel Atharva - The Origin, instantly agreed to be part of the project and that too with a lot of enthusiasm, says its author Ramesh Thamilmani.
"We felt the character Atharva and the personality of Shah Rukh Khan matched perfectly. Keeping that in mind, when we pitched the idea to him, he instantly agreed and expressed lot of enthusiasm to be associated with the project," Mr Thamilmani told IANS.
"We approached him with the basic idea and some illustrations. He has always been game for new ideas and innovations, and we think that's what must have persuaded him to be part of this project," he said.
Chennai-based Virzu Studios is behind Atharva - The Origin, and they're positive that King Khan will be "pleased and proud with the final product". "His involvement will enable the novel to have wide reach," they said.
Atharva - The Origin, a mythological fictional graphic novel, is the story of a young king who sets out to uncover his destiny.
Set on a vast island in a forgotten past, the story is populated by fantastical birds, beasts and monsters, inventions of the collaborative efforts of the author and artist.
"There are no factual, historical or religious mythological references in the story," said the author informed.
The first teaser has been received very well and based on the response, the makers plan on turning the story into a film as well.
"Talks about the book being made into a movie are on and such a possibility exists, but details have yet to be finalised," Mr Thamilmani added.
"It attempts to bring into the Indian literary canon, a blend of writing augmented by rich visual representations. Chronicling the journey of the titular character Atharva, the text will be accompanied by full page illustrations in 3D, supporting several key moments in the storyline," he said.
The last phase of the project is under completion and should be ready shortly. The novel will be made available in print, smart TV, Kindle and e-book formats by mid-2015.