Shah Rukh Khan urged everyone to respect the filmmaker's privacy and said, "We wish him happiness. It's still very personal. So, don't think I am being cagey by not answering about it" 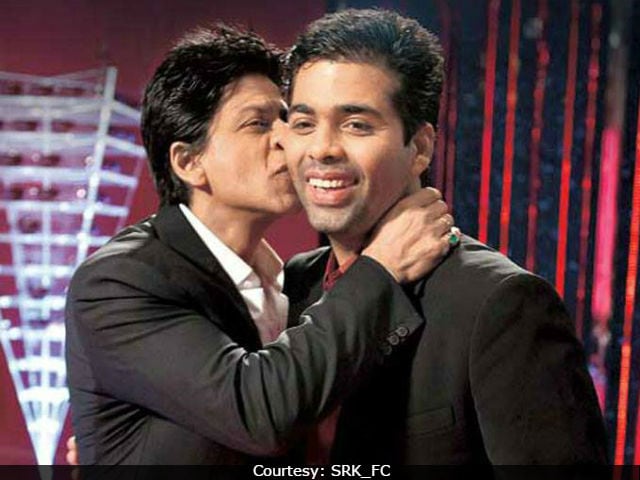 Shah Rukh Khan and Karan Johar on the sets of Koffee With Karan 4 (Courtesy: SRK_FC)

Actor Shah Rukh Khan has urged everyone to remember that parenthood is a private moment for filmmaker Karan Johar and has said that festivities can be saved for later. SRK, 51, and Mr Johar are close friends as well as longtime collaborators and the actor explained why he's unwilling to comment publicly on Mr Johar's twins, Yash and Roohi, who were born in February. Speaking at the Mijwan Charity Fashion Show, Shah Rukh Khan said, "We wish him happiness. It's still very personal. So, don't think I am being cagey by not answering about it," reports news agency PTI. Roohi and Yash have been named after Karan Johar's parents - his late father was named Yash, Roohi is an anagram of his mother's name Hiroo.
"I have had this moment in my life so, I know how personal it is. Let's respect it and leave it to that. We will have love, celebrations, happiness and health later," SRK said, reports PTI. Shah Rukh Khan also asked that everyone respect Karan Johar's privacy.
A mid-day report revealed that only three of Karan Johar's celebrity friends knew about the twins' birth - one of them was Shah Rukh Khan's wife Gauri, one of the director's closest friends. "Friends Gauri Khan, Kareena Kapoor Khan and Manish Malhotra were, perhaps, the only ones clued in to the development," mid-day quoted a source at Karan Johar's Dharma Productions as saying.
SRK has appeared in all of Mr Johar's films - Kuch Kuch Hota, Kabhi Khushi Kabhie Gham, Kabhi Alvida Na Kehnaa and My Name Is Khan - except one, Student Of The Year. He had a cameo in Ae Dil Hai Mushkil, Mr Johar's most recent film.
Karan Johar introduced Roohi and Yash via social media. He wrote: "I am ecstatic to share with you all the two most wonderful additions to my life, my children and lifelines; Roohi and Yash. I feel enormously blessed to be a parent to these pieces of my heart who were welcomed into this world with the help of the marvels of medical science. This was an emotional yet well thought out decision which I have taken after considering all the responsibilities and duties that come with being a parent."


Finally I can say I have a younger brother AND sister!!!!!! So so so happy soo much love to give uff bursting with joy!!!!! https://t.co/HCMkoR5JWL

Karan your the best human being I know and Im sure you will make the best dad.Can't wait to meet these lil munchkins https://t.co/iDl4XswvRG

Congratulations @karanjohar so happy for you. May Yash and Roohi always have a beautiful healthy life. Much love always

Congratulations my dear friend- Here's to walking your own path and paving the way for others to follow-So proud of you! https://t.co/h6mzDcbQDT