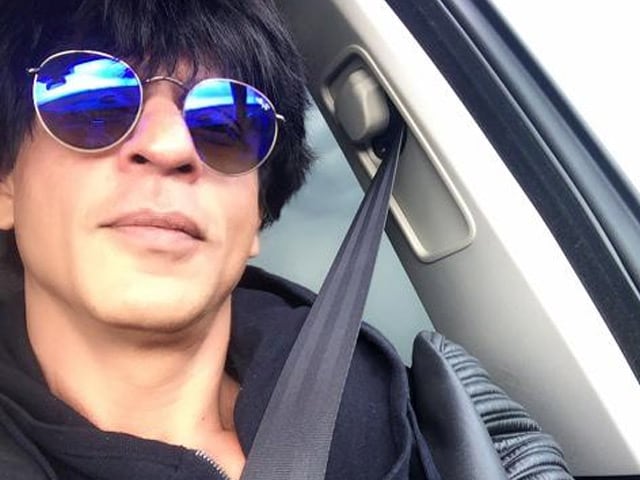 In a Twitter post, Shah Rukh Khan, in Hyderabad to shoot for Dilwale, wrote: "Thank God my co-passenger seems like good company. I feel he will keep to himself & not ask me about me!" But wait. First take a look at Shah Rukh's co-passenger

Clever camera angle? Photoshop? Shah Rukh Khan tweeted a picture of a 'co-passenger' who, for once, would 'keep to himself' and not insist on imposing his attentions on the actor. We imagine that almost never happens.
Except this once:


Thank God my co-passenger seems like good company. I feel he will keep to himself & not ask me about me! pic.twitter.com/yEWSyo2VKB

Looks like SRK likes his own company.
Shah Rukh Khan, 49, has been in Hyderabad shooting Rohit Shetty's Dilwale with co-stars Varun Dhawan, Varun Sharma and Boman Irani. Choreographer Farah Khan has also been lately spotted on the sets. (Also Read: For Shah Rukh Khan, Things Just Got Serious on the Sets of Dilwale)
Farah's presence meant that SRK had to put away the 'PS games':


Back in Hyderabad after a day at home, with #Dilwale Team! @iamsrk n @iamsrk@bomanirani now pls stop the PS games!! pic.twitter.com/dyPrrm1BlG

However, there was compensation in the form of biryani from Sania Mirza's home as an Eid treat for the unit. Shuttler Saina Nehwal dropped by the sets to visit SRK last week and over the weekend, he hung out with Telugu star Mahesh Babu. So it's all been good. (Also Read: How Shah Rukh Khan and Mahesh Babu Made it a Super-Starry Saturday)
Dilwale, expected December, also stars actress Kajol, opposite SRK, and Kriti Sanon.
Meanwhile, Shah Rukh also has Maneesh Sharma's Fan and Rahul Dholakia's Raees up his sleeve.