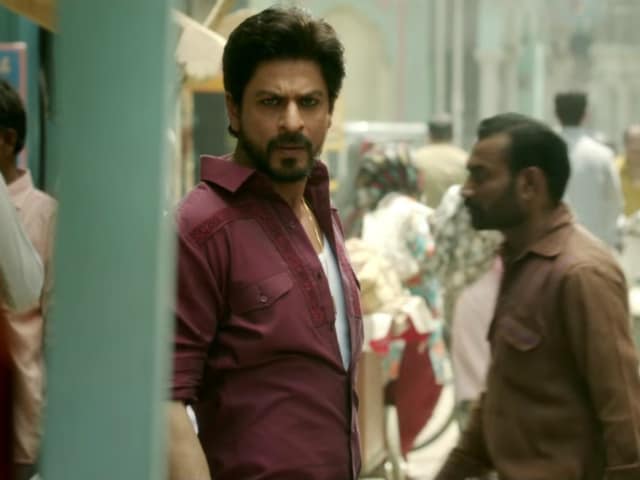 Shah Rukh Khan's Raees: A still from the film

With two weeks to go before actor Shah Rukh Khan's Raees opens, a Mumbai-based distributor has allegedly received a threatening notice from the Chhattisgarh unit of the Shiv Sena asking exhibitors and distributors not to the release the film. Raees, set in Gujarat, stars Shah Rukh Khan as a liquor baron with Pakistani actress Mahira Khan playing his wife. It is scheduled to release on January 25. Mr Rathi posted a series of tweets on his verified Twitter account yesterday, with screenshots of the document, written in Hindi, which bears a letterhead that reads 'Shiv Sena Chhattisgarh.' Mr Rathi tagged Aditya Thackeray, the Yuva Sena chief and son of Shiv Sena head Uddhav Thackeray, in one post asking if he endorses the notice received. In a separate post, he appealed to SRK's fans to help him attract Aditya Thackeray's attention. A third tweet tagged Chhattisgarh chief minister Dr Raman Singh, local BJP MP Abhishek Singh, and the Chief Minister's Office.


Dear @AUThackeray,
We have received this threat letter from your Chhattisgarh unit against playing @iamsrk's #Raees. Do you endorse it? pic.twitter.com/RHai71yGZV

Request all @iamsrk fans to help me bring this to the notice of @AUThackeray. I'm sure he will take action against this nuisance. #Raeeshttps://t.co/k6xvFMi1aM

Neither Aditya Thackeray nor Dr Singh appear to have responded yet.
Delhi-based distributor Joginder Mahajan told news agency IANS that none of the northern region distributors had received such a warning. "If a film has been cleared for release, then nobody can stop it. Raees will release on January 25. Nobody in our region has received any kind of threat from anyone," Mr Mahajan told IANS.
Last year, the Shiv Sena said they would not allow Karan Johar's film Ae Dil Hai Mushkil to release, objecting to the casting of Pakistani actor Fawad Khan. The film opened on Diwali after the intervention of Maharashtra chief minister Devendra Fadnavis. Speculation that Mahira Khan would be dropped from Raees was proved wrong later, with producers Ritesh Sidhwani and Farhan Akhtar confirming that she would be completing the remainder of her scenes. Mahira, a major star in Pakistan, makes her debut in Raees.
Raees is directed by Rahul Dholakia and co-stars Nawazuddin Siddiqui as the cop who goes after SRK's character, Raees Alam.
(With inputs from IANS)