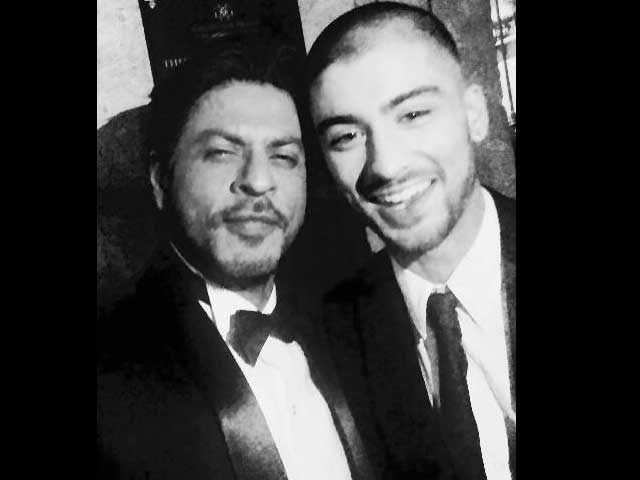 This imagee was posted on Twitter by Shah Rukh Khan

Actor Shah Rukh Khan's selfie with Zayn Malik has become the most retweeted and favourited tweet from an Indian celebrity. At last count, it had over 100,000 retweets and had been favourited over 145,000 times.
Over the weekend, SRK posted this photo of himself with One Direction's former bandmate:


This kid is so cool. May Allah bless him. Dinner time at the Asian Awards. pic.twitter.com/l0gV12n0kv

They met at the Asian Awards held in London, where SRK was awarded for Outstanding Contribution to Cinema and Zayn for Outstanding Contribution to Music. It was the musician's first public engagement after he controversially quit One Direction mid-tour.
The number of retweets racked up by the selfie post is far in excess of last year's most retweeted Indian tweet - a post from Narendra Modi's account promising 'achhe din' after the general election results were announced on May 16. The then PM-in-waiting's message was retweeted 70,513 times.
The desi twitterverse still has to catch up with the videshi one. Ellen DeGeneres' star-studded Oscar selfie is still the most retweeted of all time with over three million retweets.