Shahid Kapoor Fears No One. Wait, Sorry Mira, Didn't See You There 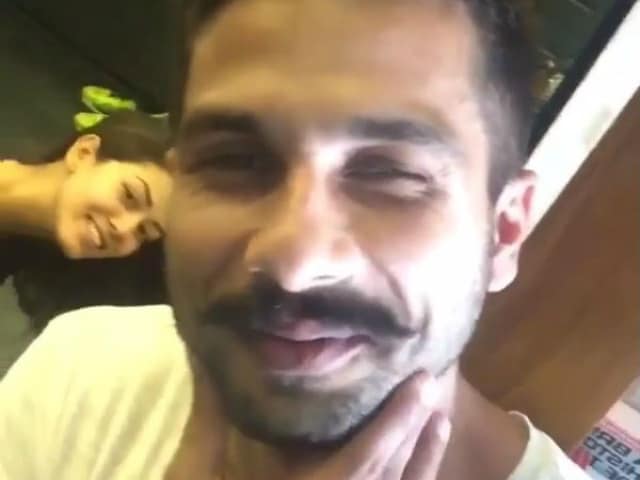 A still from the video shared by Shahid Kapoor.

Sonam, whose Neerja releases on February 19, had requested her fans and followers to post their stories of fear and courage in short videos. Shahid Kapoor, Sonam's actor-father Anil Kapoor, filmmaker Arbaaz Khan and director Homi Adajania too have responded to the 30-year-old actress

Actor Shahid Kapoor has posted a response to his Mausam co-star Sonam Kapoor's crowdsourcing of videos in aid of her new film Neerja. (Also Read: Neerja Poster: Sonam Kapoor Faces a Hijacker's Gun)
Sonam, who plays slain stewardess Neerja Bhanot in the film, asked fans and followers to post video messages about their biggest fear. "What, me fear?" was Shahid's response.
That is, until wife Mira peeked into the frame.

@shahidkapoor @mira.kapoor is one lucky girl! She is too sweet for you to be scared of her! Love you for doing this Sk #bestpersonever #fearvsneerja #Repost @shahidkapoor @sonamkapoor #neerja #nofear

HahahahhH daddy!! My biggest fear is mom! #Repost @anilskapoor #fearvsneerja @sonamkapoor Fear is not a factor!

You're so cool Homi! Fear indeed keeps you alive! Love you for sharing this! #Repost @homster #Fear can keep you alive...embrace your fears, use your fears, don't let it be the other way around ... #fearvsneerja @sonamkapoor #adventure #adventuresports #life

Shahid and Mira married in New Delhi in July 2015. Shahid, whose last screen appearance was in Shaandaar, has projects like Udta Punjab and Rangoon lined up for 2016.
Sonam's Neerja, which deals with the 1986 hikacking of a Pan Am flight, hits screens on February 19.