"This is the stuff I've been reading in papers and I find it absurd when they say it is 'two hero' film. It's a great opportunity for all three of us. It's a great role for Deepika, a fantastic role for Ranveer and great one for me," says Shahid Kapoor 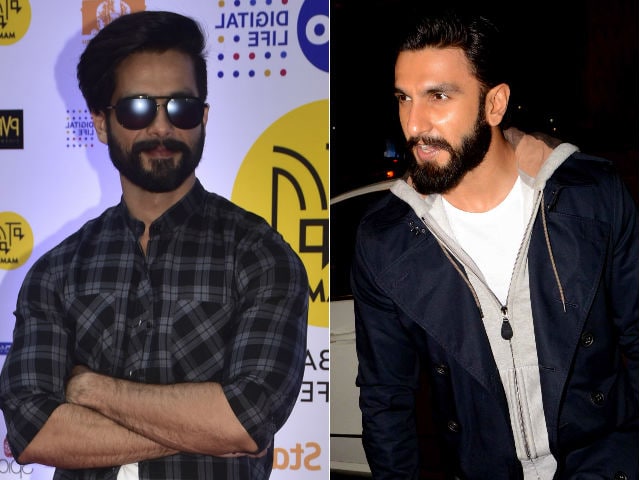 Actors Shahid Kapoor and Ranveer Singh's roles in upcoming film Padmavati and their apparent cold vibes have been making news for a while now but the Udta Punjab star says the "two-hero" concept is over-hyped and frivolous.
Shahid plays Raja Ratan Singh, Rajput ruler and husband of queen Padmavati (Deepika Padukone) in the period drama, to be directed by Sanjay Leela Bhansali. Ranveer will be seen as Alauddin Khilji, the medieval-era Delhi sultan, who falls in love with Padmavati.
Shahid said he doesn't see the film as a risk because it has another male star and in fact feels the project is a fantastic opportunity for all the three actors.
"This is the stuff I've been reading in papers and I find it absurd when they say it is 'two hero' film. The film has three principle characters. These are just ways of creating some kind of material which is exciting at some frivolous level," the 35-year-old actor said.
"It's a great opportunity for all three of us. It's a great role for Deepika, a fantastic role for Ranveer and great one for me. I am happy that the film has been cast the way it has and it is getting made," said the Haider actor.
"I hope we come out with a great cinematic experience for the audience," he said during a session at the 18th Jio MAMI Mumbai International Film Festival.
Shahid said even if the film had been offered to him a few years ago, he would have signed it immediately as the actor feels leaving a movie like this would be anyone's biggest mistake.
"I wish Padmavati came to me five-six years ago, I would have done it. I am happy it is coming to me today, I am happy that I am working with a filmmaker like Sanjay Leela Bhansali. When I saw Bajirao Mastani, I went berserk because I absolutely loved it," he said.
"I am grateful for the opportunity. If five years ago I would've said no to it, someone would've whacked me and said that's the stupidest mistake of my life," he added.
(Except for the headline, this story has not been edited by NDTV staff and is published from a syndicated feed.)