Shahid Kapoor On How Daughter Misha Will, Or Won't, Influence His Choice Of Films

Shahid Kapoor said: "I do not think I will take up a film only so that I will able to show it to Misha" 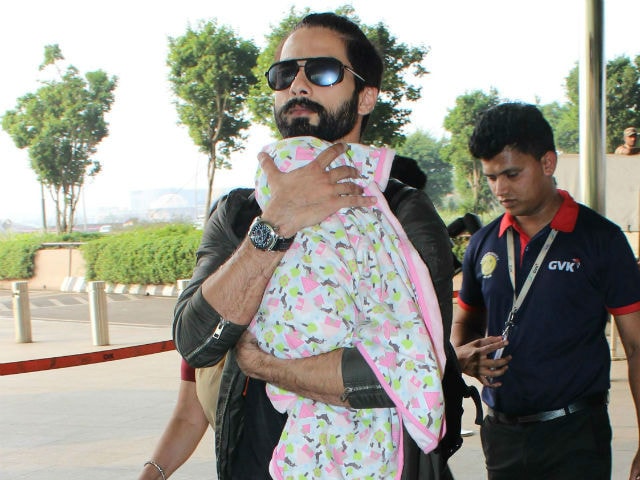 Shahid Kapoor with Misha in Mumbai.

Shahid Kapoor is all set for the release of Rangoon and the actor says his character in the Nawab Malik is the "most heroic" role he's played yet, reports news agency IANS. The 35-year-old actor, who became a father to a baby girl last year, also said that his choice of roles will not be influenced by the fact that his daughter Misha may watch his films one day. "You see, having a child changes you as an individual for sure. But I do not think I will take up a film only so that I will able to show it to Misha. I know it will take some time for her to reach a point to watch certain kinds of films. Having said that, I think I feel a little more responsible of my choice. It will reflect on my performance, of my work," he told IANS.
Recently, Shahid shared a picture of Misha and his wife Mira Rajput:

Back to Rangoon, Shahid describes his character Nawab Malik as a soldier with a "strong sense of duty and big patriot," reports IANS. "Nawab Malik is the most heroic character I have ever played so far. It is a very inspiring character and I am glad to get the opportunity," he told IANS. "My character Nawab Malik is a very different character from Tommy Singh (Udta Punjab), Charlie/Guddu (Kaminey) and Haider (Haider), and that was the reason why I played the part... Vishal sir always offers me something challenging and different," he added.
Rangoon is Shahid's third film with Vishal Bhardwaj after Kaminey and Haider. "I share a special bond with him. Since the film is a director's medium. If as an actor I am the cake, he is the icing on the cake. So no matter how good I perform, the outcome is totally dependent on the imagination of the director... How he conceived the scene, how he is capturing the nuances of my performance, camera movement. Every time when Vishal sir shoots me, I look better than what I am, I think," Shahid told IANS.

Rangoon is a love triangle set in the backdrop of World War II and Shahid said that the socio-political milieu of that time was essential to the shaping of his character in the film. "The socio-political scenario of that time was quite different. The whole nation was aroused to achieve freedom. Nawab Malik symbolized that emotion in the film. But there is an emotional tussle as he was an Indian, serving for British Army and there come different dynamics that makes it interesting," Shahid told IANS.
Shahid Kapoor is married to Delhi-based Mira Rajput, 24, and their daughter Misha was born on August 27, last year. After Rangoon, Shahid will get busy filming Sanjay Leela Bhansali's Padmavati.
(With IANS inputs)