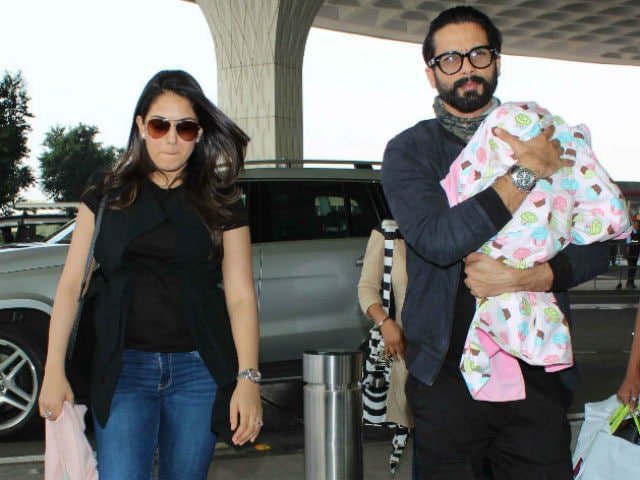 Shahid Kapoor and Mira with Misha at the airport

Shahid Kapoor introduced his little daughter Misha to the world via an adorable Instagram post on Wednesday. Misha, almost six-months-old, is cradled in her mother Mira Rajput's arms in the black and white photo shared by the 35-year-old actor. "Hello world," Shahid captioned the picture. A day ago, he posted a glimpse of his baby daughter in and then revealed he would be sharing a proper picture of her. "Introducing her to the paparazzi is little odd. I will share her picture soon. We are very happy to share her picture with everybody," Shahid told news agency PTI. World, say hello back to Misha Kapoor. Here's what Shahid posted:

Here's what Shahid posted on Tuesday:


Sunsets with my angel.

Shahid Kapoor and Mira Rajput have been careful to shield Misha from the cameras whenever they have appeared in public - notably at the airport - with her.
On National Girl Child Day, Shahid shared a heartwarming message for Misha on Twitter. He wrote: "Misha is better than anything I could ever ask for. Every girl is truly a blessing to the entire family."

Earlier this year, the Udta Punjab actor had also shared a picture of Misha's feet in their booties, captioned: "Mi-shoe."

Shahid Kapoor married Mira Rajput in New Delhi in July 2015. Misha was born on on August 27, 2016.
Shahid Kapoor was last seen in 2016 film Udta Punjab, which earned him seveal accolades. He will next been seen sharing the screen space with Kangana Ranaut and Saif Ali Khan in Vishal Bhardwaj's Rangoon. Shahid has earlier worked with Mr Bharadwaj in Haider and Kaminey. Shahid is currently busy shooting for Sanjay Leela Bhansali's historical drama Padmavati, which also features Deepika Padukone and Ranveer Singh.