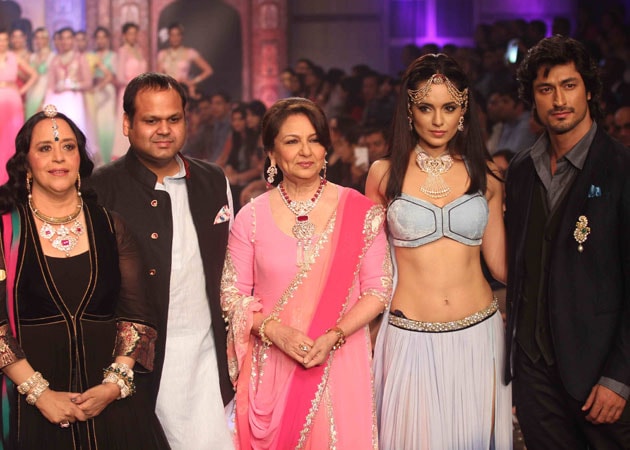 From yesteryear diva Sharmila Tagore to gorgeous Kangana Ranaut and action star Vidyut Jammwal, Bollywood stars ruled the ramp on the fourth day of the ongoing India International Jewellery Week (IIJW).
The theme of the Birdhichand Ghanshyamdas Jewellers show was a reflection of the charm of Rajasthan in Indian cinema.
The colours of Rajasthan, the pulsating beat of the vibrant state's music and the energy of the people came alive during the presentation.
The show began with 68-year-old Sharmila walking down the ramp in a baby pink sari teamed with a Mughal jacket and ruby/diamond neckpiece.
Moving into the '80s and '90s era of cinema when the rich Rajasthani tribal influence was seen in Bollywood films, it was Ila Arun who brought the house down as she rocked to the tune of folk songs from the state wearing tribal chunky jewellery in gold and diamond.
Ending the show were Bollywood's latest action hero, Vidyut Jammwal, who looked dapper in a suit with an ornate glittering brooch alongwith actress Kangana Ranaut.
The 26-year-old actress glided on the ramp in a thigh-high slit white and blue lehenga teamed with a choli. She completed her royal look with a winged diamond necklace, maatha patti, rings and earrings.
Models sashayed down the ramp in saris, anarkalis and lehenga-cholis created by designer Pallavi Jaipur.