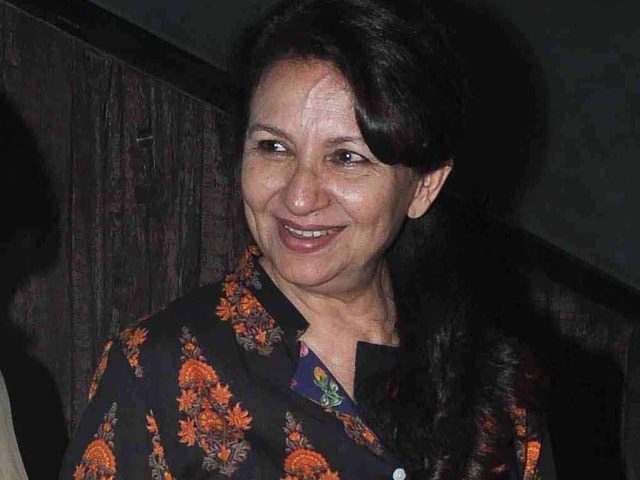 Sharmila Tagore photographed at an event.

"Society is patriarchal. So film industry by definition is certainly patriarchal. The male gaze has dominated it although we had lengthy roles. But the female characters that became popular were the ones that sacrificed. Now by enlarge, I would say things have changed," said Sharmila Tagore

Veteran actress Sharmila Tagore said that though the current Bollywood actresses are getting meatier roles now, the male dominance is still visible in the second half of the Hindi films.
The 68-year-old National award-winning actress said that the male gaze has always influenced the way characters and stories shape up in the movies.
"Society is patriarchal. So film industry by definition is certainly patriarchal. The male gaze has dominated it although we had lengthy roles. But the female characters that became popular were the ones that sacrificed. Now by enlarge, I would say things have changed. Like in Piku for instance- a girl looking after the father- now this concept wasn't there in our time. The way female characters dress, speak and present themselves is much better than our time. But the second half of the film still goes towards male dominance," she said.
The Amar Prem actress also said that multiplexes have introduced experimental directors.
"Thanks to multiplexes there are lots of experiments going on and we have some great directors like Sujoy Ghosh, Shoojit Sircar and Dibakar Banerjee. So I think this is a very exciting time for Hindi film industry," she added.
Sighting the difference between her time and the current phase of filmmaking, the actress said that the film industry has become more systematic and the use of money is balanced now.
"Today money is in place. Everything is organised. Actors work in one film at a time. We used to do four or five films at a time and were not able to experiment with too many things. But the heart was in the right place and everybody worked passionately. We had wonderful directors like Bimal Roy, Hrishikesh Mukherjee and Raj Kapoor," she said.
Sharmila, who started her career with Satyajit Ray's Bengali film Apur Sansar, made a switched to Bollywood with hits like Aradhana, An Evening in Paris, Mausam, but the actress never lost touch with regional cinema.
"In 1963, when I joined Hindi film industry it raised many eyebrows. Given the surname that I had, and then introduced to by Satyajit Ray, many thought, 'how come she is joining Bombay films', which was thought of as mindless entertainment. But I never ended my connection with Bengali cinema. I kept coming back. I did Nayak, Days and Nights in the Forest. My last Bengali film was three years ago. I never wanted to lose touch with working and expressing myself in my own language," she added.