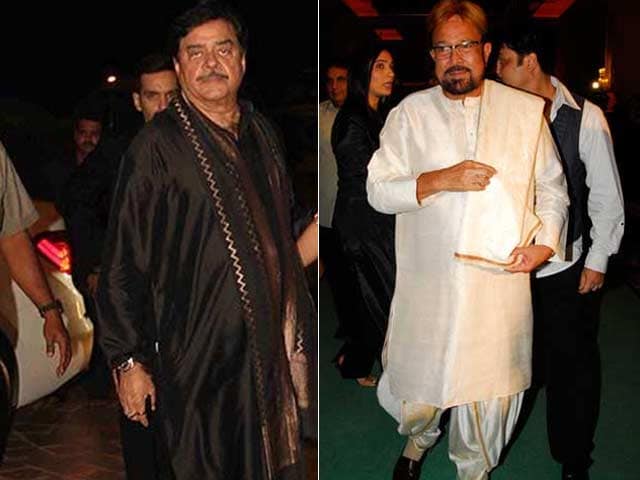 "If there is one regret that I have in politics, it is that I was made to fight Rajesh Khanna from Delhi in 1991. But I couldn't say no to L K Advani ji, who was my guide, guru and ultimate leader," Mr Sinha revealed in his biography Anything But Khamosh

Actor-politician Shatrughan Sinha has revealed that contesting elections against Bollywood actor Rajesh Khanna was his 'biggest regret' and that he had 'apologised' to him after battling it out with him in the 1991 by-polls. (Also Read: On Shared Birthday, Twinkle Tweets Old Pic of Herself With Dad Rajesh Khanna)
"If there is one regret that I have in politics, it is that I was made to fight Rajesh Khanna from Delhi in 1991," Mr Sinha reveals in his biography Anything But Khamosh scheduled for release on Wednesday.
Mr Sinha also states that losing the electoral battle was one of his 'rare moments of dejection.'
"For this, in his lifetime, I had apologised to Rajesh Khanna both directly and indirectly. Under no circumstances should I have started my active political career with a by-election. But I couldn't say no to L K Advani ji, who was my guide, guru and ultimate leader," Mr Sinha writes in the book.
LK Advani, who had contested and won the 1991 elections from Gandhinagar and New Delhi, had opted for his seat in Gujarat.
In the by-election that followed for the Delhi seat, then political novice Mr Sinha was brought in by the BJP to counter the Congress candidate Rajesh Khanna.
Mr Sinha insisted that he joined the party and fought the by-election "Only because of the persuasion of Kalyan Singh, Shanta Kumar, Madan Lal Khurana and other party leaders.
"I had initially resisted all their overtures but I was finally taken before Advaniji, and he had said, 'It's a question of our prestige and I don't want to hear a 'No' from you this time."
"When I lost that election, it was one of my rare moments of dejection," he says.
"It was the one time I really cried. I also felt very let down because Advaniji had not come even for one day to campaign for me," he adds.
Terming his debut electoral loss a 'misstep', Mr Sinha reveals that it was a 'terrible time for him'.
"Politics showed its ugly profile in many ways. After I lost that election, I was so sharply sidelined that I would be made to feel distinctly unwelcome at our party office on Ashoka Road. People would stop talking when I entered, or change the topic and make me uncomfortable.
One day, a party official who is still with the BJP, came up and told me, 'Shatruji, please sit outside. We'll call you when we're ready to talk to you'. That went straight to my heart and hurt me so badly, that for years, I never visited the office," he reminisces.