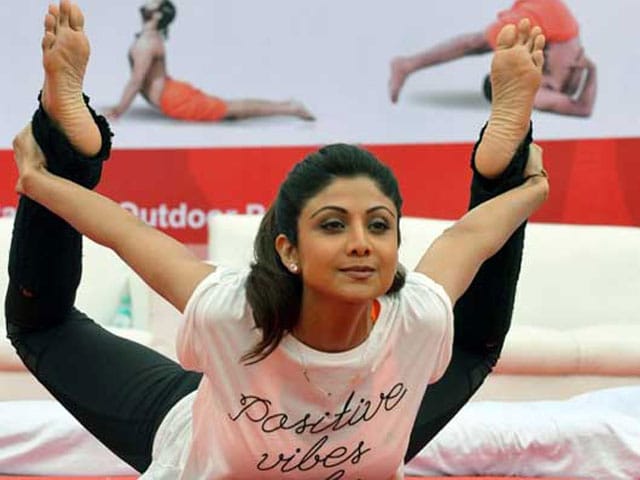 Shilpa Shetty is known to be a fitness enthusiast. Image courtesy: AFP

Bollywood actress and fitness freak Shilpa Shetty, who has often spoken about the benefits of yoga, says that she would 'like to play catalyst' in Prime Minister Narendra Modi's initiative to promote yoga on a global level.
"Modi-ji is taking yoga on such a big level and I'd also like to play catalyst in it. I want people to know that yoga has played such a huge role in my life and I want them to stir towards yoga," Shilpa told IANS.
Shilpa, who attended the International Yoga day celebration on Sunday at Kaneerava stadium, Bengaluru, posted a series of pictures of herself performing various poses on Instagram

Doing Vrikshasan or the tree pose

Shilpa, who has a son Viaan with businessman Raj Kundra, also said that she wants her child to "inculcate good habits".
"I want my kid to inculcate good habits, so he has started off doing some yoga. I hope he continues to do yoga," she added.
Also confirming the news about her book, Shilpa told IANS, "I am writing a book on nutrition. My focus will be on Indian food and how you can lose weight and stay healthy with Indian food".
Shilpa made her debut in Bollywood with 1993's Baazigar. She shot into the limelight with her dancing moves in the song Main Aayi Hoon UP Bihar Lootne from the 1999 film Shool. Some of her other acting credits include Chhote Sarkar, Dhadkan and Rishtey.
The actress is also a former contestant of internationally acclaimed British reality show Big Brother. She also a co-owner of Indian Premier League team Rajasthan Royals, and handles other entrepreneurial ventures.