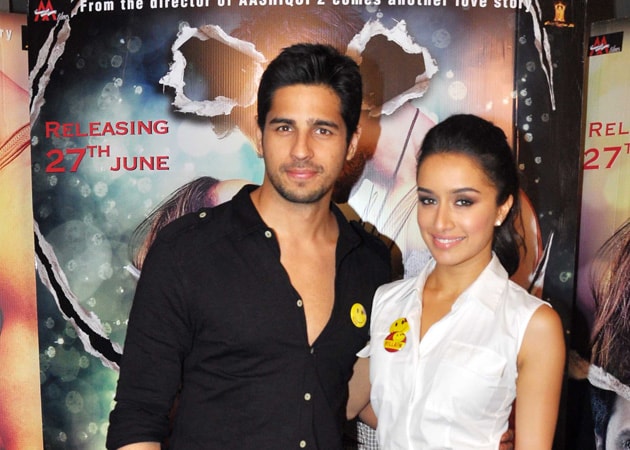 Sidharth and Shraddha are currently busy promoting the film

Being the daughter of a father best-known for celluloid infamy might be difficult for some but not for actress Shraddha Kapoor. Shraddha is really proud of her father Shakti Kapoor's repertoire of screen villains and of the fact that people adore Crimemaster Gogo, his famous parody baddie from Andaz Apna Apna.
Crimemaster Gogo is a character so beloved, 20 years after the film was first released, that he has a legion of fans on Facebook and has acquired 'cult icon' status independent from the equally cult film. At a promotional event for her new film Ek Villain, Shraddha quipped, "So aaj ek villain ki beti, Ek Villain mein ( So a villain's daughter is in Ek Villain)."
She said that EK Villain has no heroes and every lead character has an element of negativity to it. And since she has a villain, her dad, at home she really had no trouble hanging out with the villains on set. (Also Read: Shraddha speaks about comparisons in the industry)
On a more serious note, Shraddha said that Sidharth's character in the film, Guru, epitomises the new age villain. She also revealed that Sidharth took this opportunity - playing a screen baddie - to release his pent up frustration and anger, a sentiment that Sidharth himself seconded, describing the role as therapeutic.
Sidharth said that the line that used to separate good and bad characters on screen is blurring. "You no longer have to be the Gabbar or Mogambo who only do negative and bad things and have a den. You can now play characters who oscillate between good and bad and that's what I tried to do (in EK Villain)," he added.
Sidharth, who started out in Karan Johar's Student Of The Year, also said that he would keep experimenting with his roles: " There's no guarantee that any film will work or not. My endeavour is to keep it exciting and explore the limits that even I do not know (about). If I keep doing the same things even I will get bored apart from criticism that he is not doing anything different. I am a bit conscious of that, may be slightly early (in my career), so I try to get some different element in all my roles."
However, he agreed that actors don't create roles but only choose from those given to them. So he will continue to choose different roles as and when they come.
Watch: