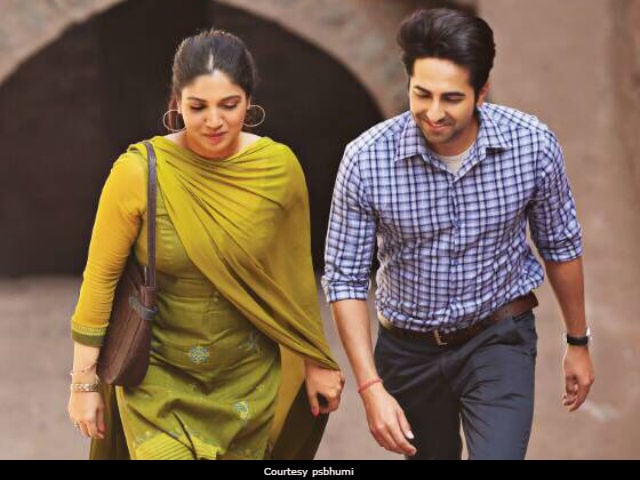 The first poster of Ayushmann Khurrana and Bhumi Pednekar's upcoming drama Shubh Mangal Saavdhan is here. The makers unveiled the poster on Tuesday, in which the Dum Laga Ke Haisha co-stars feature against the backdrop of a historical architecture. "Making a Shubh entry into your Mangal lives," Bhumi Pednekar wrote on Twitter, adding: "Be Saavdhan, we are standing up for love." The same sentiment and warning was shared by Ayushmann, who wrote: "'Stand up' for love," while sharing the poster. Ayushmann Khurrana and Bhumi Pednekar are co-stars of critically acclaimed 2015 film Dum Laga Ke Haisha. Ayushamann and Bhumi will share screen space for the second time in Shubh Mangal Saavdhan.


Making a Shubh entry into your Mangal lives on 1st Sep 2017.Be Saavdhan,we are #standingupforlove#ShubhMangalSaavdhan1stSEP@ayushmannkpic.twitter.com/rsTNjw2UVK

Ayushmann and Bhumi's new film is a remake of 2013 Tamil movie Kalyana Samayal Saadham and will be directed by South filmmaker R S Prasanna. The film went on floors in March and the first schedule was shot in Delhi for a month. Some parts of the film will also expectedly be shot in Haridwar, where Dum Laga Ke Haisha was filmed.
The first look of Bhumi and Ayushmann was released in January when co-producer Aanad L Rai shared details about the storyline of the film. "Shubh Mangal Saavdhan is a funny and layered story. These are the kind of stories I've identified with, right from the time I made Tanu Weds Manu. It is a simple narrative with an interesting bend and the reason I cast Ayushmann and Bhumi is that they fit the bill perfectly for this part. They are the sort of actors I could be friends with even if they didn't belong to the fraternity. They are simple and humble," Mr Rai had said.
Bhumi Pednekar will next be seen in Toilet - Ek Prem Katha, co-starring Akshay Kumar while Ayushmann Khurrana is awaiting the release of Meri Pyaari Bindu, also featuring Parineeti Chopra.