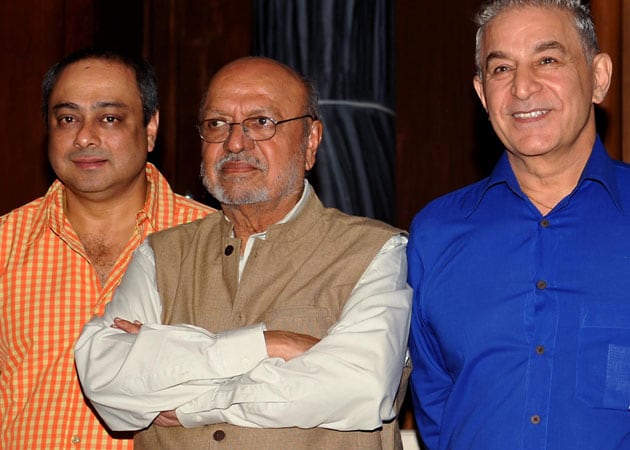 Shyam Benegal with actors Sachin Khedekar and Dalip Tahil at the press conference.

Renowned film director Shyam Benegal held a press conference about his new film The Story of the Making of the Constitution of India - Samvidhaan in Mumbai on Monday (September 23, 2013).

Renowned film director Shyam Benegal held a press conference about his new film The Story of the Making of the Constitution of India - Samvidhaan in Mumbai on Monday (September 23, 2013).
Speaking at the event, the filmmaker said, "I felt it might be very interesting to do this ten part series on the making of the Indian constitution which is what I decided to do. And since it got proved by the Rajya Sabha chairman itself, I decided to go ahead. This is actually a story set between December 1947- 1949. It started 8-9 months before India became independent and then went on until the eve of becoming a Republic. During this period many things happened to India, one was India split into India- Pakistan so the worst things took place that time. Despite all of that we created very fine, secular constitution and gave maximum representation to our country."
Actor Sachin Khedekar, who plays Dr B R Ambedkar in the film said, ". I find myself very fortunate that I have been able to play and look this parts and as an actor I feel, the fact that a director of Shyam Benegal's calibre saw Subhash Chandra Bose or Mr Ambedkar in me, gives me a huge high."
The set of the film is a replica of the Central Hall of Parliament during the time the Constituent Assembly had its sittings. At the end of the marathon sittings, India became a republic when the Constitution was adopted in 1950.
Divya Dutta, who plays Poornima Banerjee says, "I think when it comes to Shyam Benegal, he is very special as far as film making is concerned. So, it has been very special for me. And constitution is something which is very integral to us. When I came in here with Poornima Banerjee's role, she is one aggressive women who puts her point of view very straight and I love the sense of humour.
Neeraj Kabi, who played the role of the ailing monk in Ship Of Theseus, plays Mahatma Gandhi, and Dalip Tahil is seen as Pandit Jawaharlal Nehru yet again after Bhaag Milkha Bhaag. While a film on the Indian Constitution may appear dull or too intellectual, Benegal promises that it will be quite the opposite.