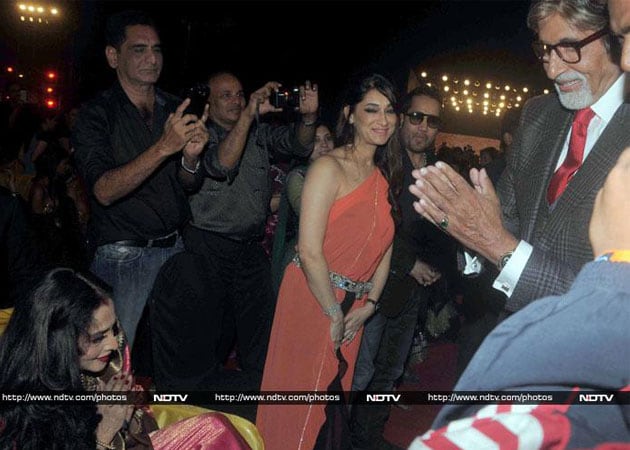 Big B says namaste to Rekha

Amitabh Bachchan ended 33 years of sub-zero snubbing by greeting Rekha with a namaste and a smile at the Screen Awards.

It was a moment long looked for by industry insiders and cine-fans and it happened completely unexpectedly. At the Screen Awards held in Mumbai on January 14, superstar Amitabh Bachchan didn't give actress Rekha, his co-star of many hit films and rumoured once-upon-a-time paramour, the public cold shoulder he has never failed to deliver ever since Silsila, their last film together, in 1981. No. This time, circa 2014, he ended 33 years of sub-zero snubbing by greeting the beaming Umrao Jaan star with a namaste and a smile.
This was no accidental Bachchan blip. Big B's wife, the redoubtable Jaya, also greeted her reported one-time rival and was photographed clasping her hand. Both actresses were resplendent in gorgeous silk sarees, dripping with diamonds and gold. 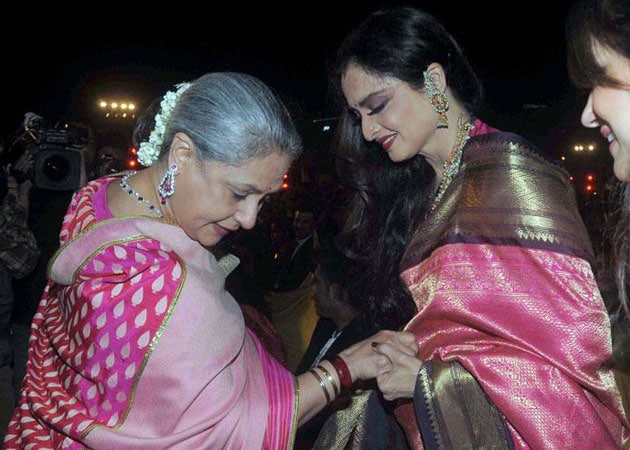 Jaya Bachchan with Rekha
Amitabh Bachchan's alleged romance with Rekha forms a part of Bollywood folklore. Their affair reportedly started on the sets of Do Anjane (1976), their first film together. Amitabh Bachchan had already been married to Jaya Bhaduri for three years at the time. Rumour has it that Amitabh and Rekha used to meet at a bungalow belonging to one of Rekha's friends while shooting Alaap the next year. Their romance continued to bloom through the years and they co-starred in movies such as Immaan Dharam (1977), Khoon Pasina (1977), Ganga Ki Saugandh (1978), Muqaddar Ka Sikander (1978), Mr Natwarlal (1979) and Suhaag (1979). By the time Ram Balram released (1979), the two were reported to have begun spending more and more time together off the sets.
There were also reports that Jaya Bachchan had made it very clear to Rekha that she would never leave her husband. In 1981, director Yash Chopra pulled off the biggest casting coup in Bollywood with Silsila, the dramatis personae of which was made up of Amitabh, Jaya and Rekha, playing three points of a reel love triangle that seemed to mirror the rumoured real-life one. Big B and Rekha never starred in a film together again and two years later, Amitabh Bachchan's almost-fatal accident Coolie accident served to cement his relationship with his wife.
Since then, the Bachchans have carefully avoided Rekha in public. Now it seems that winter has ended.