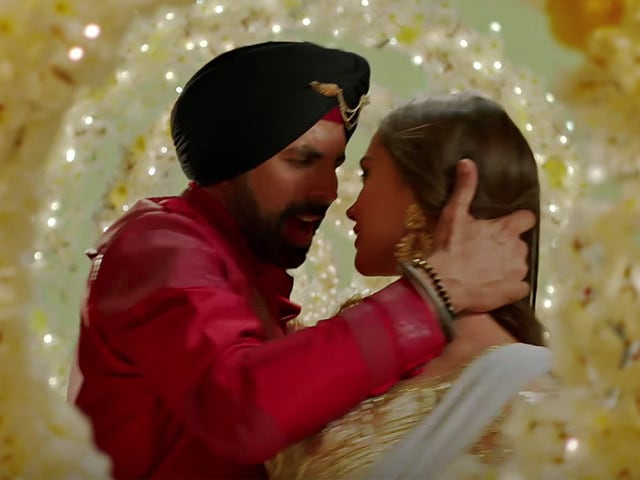 A still from the song Singh and Kaur.

Singh is Bliing's new song, titled Singh and Kaur, starts with Akshay Kumar making a roaring entry (literally) and then dancing his way through in traditional bhangra style with his Kaur, played by Amy Jackson

Actor Akshay Kumar, as Raftaar Singh, introduces the world to his Kaur, played by Amy Jackson, in the new song Singh and Kaur from their film Singh is Bliing.
The song starts with Akshay making a roaring entry (literally) and then dancing his way through in traditional bhangra style with Amy. True to the film's title, Singh and Kaur are dressed in super-duper blingy clothes. (Also Read: In Singh Is Bliing, Akshay Can't Stop 'Dan-Singh' as Raftaar Singh)
The song is like any other Bollywood number, but its chirpy beats has what it takes to make it to your playlist. Singh and Kaur has been composed by Manj Musik, who also gave vocals with Nindy Kaur Ft. Raftaar. (Also Read: Singh is Bliing Not a Sequel to Singh is Kinng: Akshay Kumar)
The film, directed by Prabhu Deva, also stars Lara Dutta and Kay Kay Menon. It will release on October 2.
Watch (sunglasses recommended):