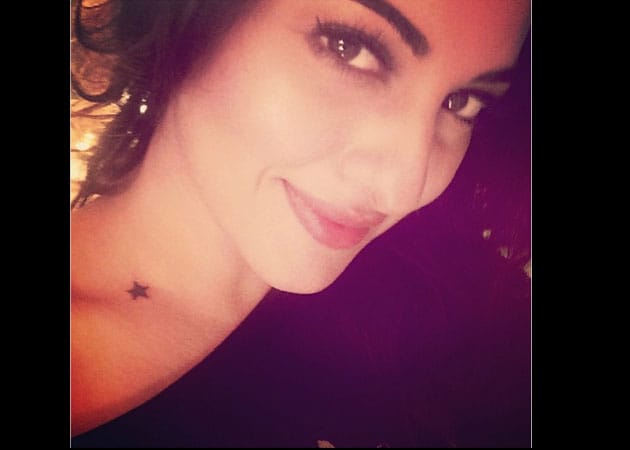 Bollywood actress Sonakshi Sinha, who turned 27 today, has given herself a gift for life - a tattoo of a star.

Bollywood actress Sonakshi Sinha, who turned 27 today, has given herself a gift for life - a tattoo of a star.
The Dabangg actress took to Twitter to share a photograph of herself and her newly acquired tattoo, and posted: "Surpriiiiise! My birthday gift to myself is this tattoo. My guiding star, now always with me."
The tattoo is placed above her collarbone.
Daughter of veteran actor Shatrughan Sinha, Sonakshi made her Bollywood debut in 2010 with the blockbuster Dabangg opposite Salman Khan. That set the ball rolling for her and she has since featured in films like Rowdy Rathore, Son Of Sardaar, Dabangg 2, Once Upon Ay Time In Mumbai Dobaara!, Boss and R... Rajkumar.
Her bubbly and vivacious screen presence came as a boon to typical desi potboilers, but her performance in Lootera was widely lauded for being sensitive and emotional.
Sonakshi is currently awaiting the release of Holiday: A Soldier is Never Off Duty Films, in which she stars with Akshay Kumar. The film will release this Friday.