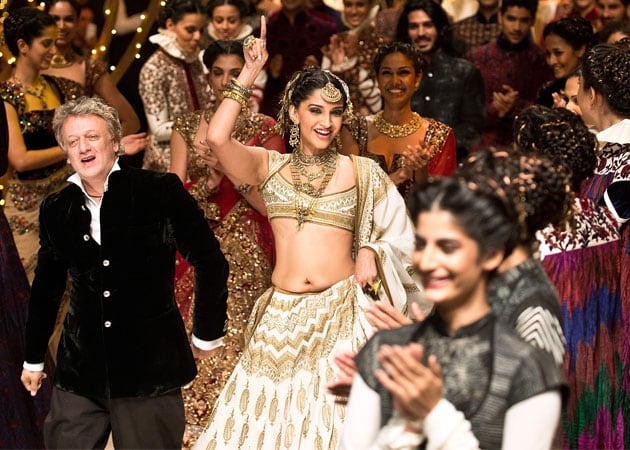 Sonam Kapoor performed to the tunes of a sexy cabaret number

Vivacious actress Sonam Kapoor was at her sensuous and playful best as she walked the ramp for fashion designer Rohit Bal at the India Bridal Fashion Week here.

Vivacious actress Sonam Kapoor was at her sensuous and playful best as she walked the ramp for fashion designer Rohit Bal at the India Bridal Fashion Week here.
She broke into a jig Friday to the "sexy" cabaret number Aa jaane jaan from the 1969 Hindi film Inteqam playing in the background.
With spellbinding ambience - large pink and white lotus props laid across and above the ramp, all lit-up; evergreen Bollywood tunes; regal wardrobe; and a showstopper who did complete justice to the mood and theme, it was a visual delight.
The heart-warming Lag jaa gale (Woh Kaun Thi, 1964) set the pace for the show, and then the audience couldn't stop humming and swaying to melodies like Yeh hai reshmi zulfon ka andhera (Mere Sanam, 1965), Baahon mein chale aao (Anamika, 1973) and Aaiye meherbaan (Howrah Bridge, 1958), moving on to more contemporary Kehna hi kya (Bombay, 1995) and an instrumental version of Roja jaaneman (Roja, 1992), only to return to Aa jaane jaan.
"It felt great because these songs are from the 1950s and 1960s, the golden period of Indian cinema...I have always wanted to act to that kind of music, so it's enough for me to walk to it, and listen to it and be a part of it in some creative way," Sonam told reporters post the show.
In a cream-coloured lehenga choli with understated gold embroidery and kundan jewellery, she, however, hardly made a coy bride, blowing kisses and laughing out in her carefree demeanour. The jhoomar on the side of her head and other ornaments caught many eyeballs.
Bal's Mulmul collection saw an interesting melange of the pristine simplicity of muslin and grandeur of velvet, with different forms of embroidery and surface ornamentation.
The veteran designer used antique Kashmiri embroidery on muslin to tie-and-dye techniques on fabrics like chanderi and voiles. Rich jewel tones like royal blue and regal red combined with ivory muslin gave the ensemble a unique grandeur.
Victorian collars, structured corsets, gowns, achkans, bandhgalas, angarkhas and saris dominated the collection. It was replete with myriad options for both men and women.
Of his collection, Bal said: "I wanted to bring in a certain amount of luxury...very understated, very elegant...truly inspired by Sonam Kapoor."
Acknowledging appreciation for the ambience, the designer told IANS: "Since the collection was fairly Indian, I wanted to use some of our favourite Indian songs... mostly sensuous, sexy, romantic and very naughty ones."
"I believe it is very important for people to relate to what they are listening and seeing during a show. So, it is important to be able to create an ambience where everyone feels comfortable in... and that's what I wanted to do," he added.
Well, that's what he truly managed to do - one could see designer Poonam Bhagat humming the songs while J.J. Valaya took a front row seat to applaud Bal's designs.
For Bal, the success of the show was in the fact that Sonam was already dancing to "Aa jaane jaan", one of his favourite tracks, even before he could reach out to her to take a bow for the presentation.
"I looked behind and I saw Sonam already dancing, and that was the most important part of the show. She was happy, I was thrilled and there was a lot of positive energy all around... That's all that you want as a designer after a show," he said.