In a Snapchat video, Sonam wondered how Kareena would feel about social media while shooting for Veere Di Wedding and ends the short chat by saying, "Bebo, we love you" 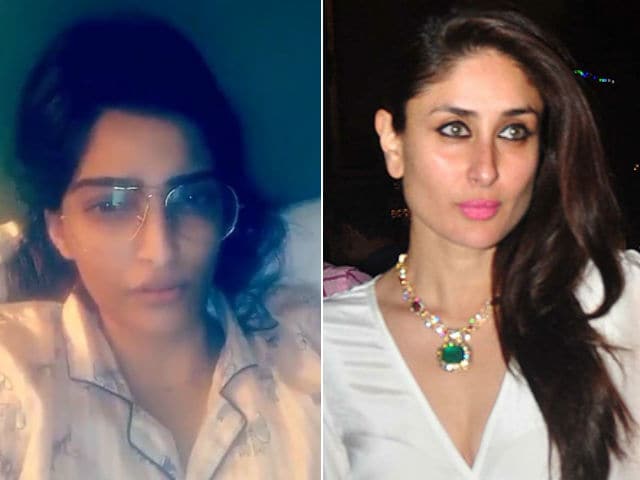 Sonam Kapoor (L) in a still from the Snapchat video.

Actress Sonam Kapoor is all set to work with Kareena Kapoor Khan in Veere Di Wedding, which has been co-produced by Rhea Kapoor. And before the film goes on floor, the Kapoor sisters have a question and a special message for Bebo, as Kareena is fondly called.
In a Snapchat video, Sonam wondered how Kareena would feel about social media while shooting for Veere Di Wedding and ends the short chat by saying, "Bebo, we love you."
Thanks to fans, the video saw light on Twitter:

For the uninitiated, Kareena belongs to the other Kapoor family of Bollywood, who've kept their distance from social media in general. The exceptions are her uncle, actor Rishi Kapoor, his wife Neetu Singh and their daughter Riddhima Kapoor Sahni.
Kareena's actor husband Saif Ali Khan isn't much of a social media buddy either and the exceptions at the Pataudis are Soha Ali Khan and her husband Kunal Khemu.
Kareena, who is expecting her first child with Saif, will film for Veere Di Wedding till October, when she will be in her second trimester. Her pregnancy will reportedly be incorporated in the film's script. After October, she will next shoot for the film three months after her delivery in December.
The makers of Veere Di Wedding - Rhea and Ekta Kapoor - knew about Kareena's pregnancy before they signed her for the film.
Veere Di Wedding, directed by Shashanka Ghosh, also stars Swara Bhaskar and Shikha Talsania.