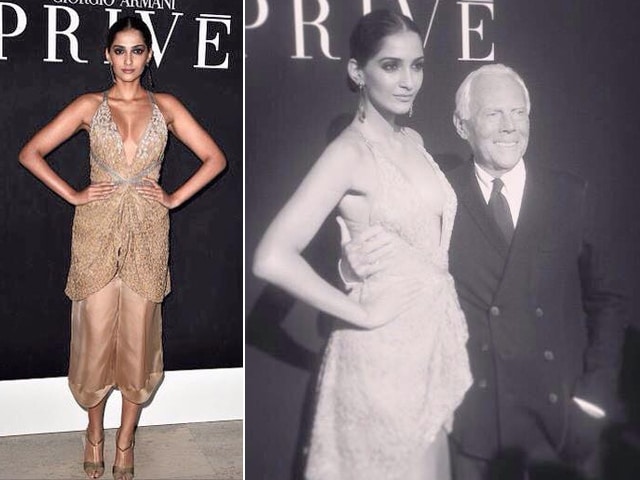 This image was posted on Facebook by Sonam Kapoor

Sonam in Armani, Priyanka in Victoria Beckham. Kangana next?

Just when we think actress Sonam Kapoor can't stun us sartorially anymore, that's exactly what she does. Sonam put the model into role model for fashionistas, not just in India but across the world as she attended an Armani celebratory bash in Paris at the invitation of the designer himself.

It's no wonder that more and more international designers are wooing our fashionistas. Granted Sonam is the hot favourite with everyone from Armani to Tommy Hilfiger, not surprisingly since fashion is clearly her comfort zone perhaps more than films.

Indian-origin actress Freida Pinto comes a close second - again an actor who makes more news for her wardrobe than her work.

However, that doesn't mean that international designers aren't keeping a watch out for a fashionista in the making, whether it's Posh & Becks commenting on Priyanka Chopra wearing a Victoria Beckham dress or Christian Louboutin or Jimmy Choo ensuring they have a strong foothold in Bollywood.

Jimmy Choo may not have a Bollywood muse. "All the Bollywood stars are ideal to me. I'm hoping some of them will come to me and say 'hey Jimmy, you want to have dinner?'," he said. But Louboutin wears his love for Bollywood on his sleeve and his shoes, particularly with the line Bollywood Boulevard.

While we predict that Sonam will continue to be popular with the stylish swish set, we wouldn't be surprised if Kangana Ranaut is the next big find on the international fashion scene. While Sonam provides the elegance, Kangana could definitely provide the edge. Kangana may not be to the manor born but she certainly has a manner when it comes to fashion, a manner which we're guessing will increasingly be appreciated by global fashionistas.

Courtesy our fashion forward star, Bollywood and by virtue the Indian fashionista, has been upgraded to the front row, not just at fashion shows, but in international designers' imaginations - and that, as we know, is where the magic happens.