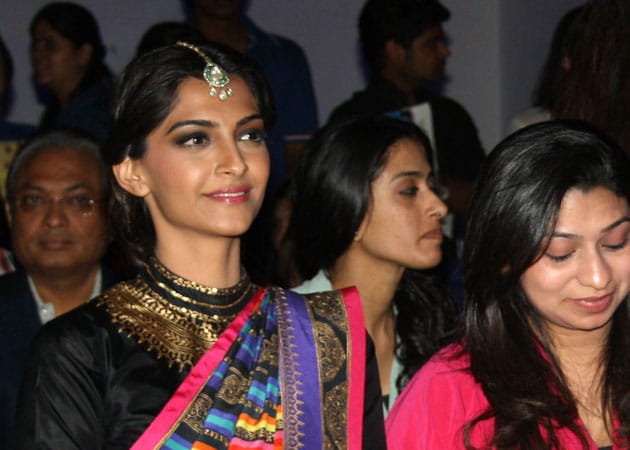 Sonam Kapoor plans to make a style statement in an Indian outfit at the Cannes International Film Festival.

This is her third year at the Cannes International Film Festival and actress Sonam Kapoor plans to make a style statement in an Indian outfit at the red carpet there.
Starting on May 15, the event will see screenings of three Indian movies Monsoon Shootout, Bombay Talkies and Dabba. At the 11-day event India will be the guest country, while Bollywood actress Vidya Balan will join the jury panel at the 66th edition of the festival.
And Sonam plans to enhance the Indian flavour by hitting the red carpet in desi look.
"I always walk two red carpets for Cannes and make it a point to wear an Indian outfit on at least one occasion. I had previously worn Masaba Gupta and Anamika. I will wear an Indian outfit for sure for one or both the red carpet events," Sonam told reporters here Monday at the unveiling of the L'Or sunset collection and Bollywood inspired make-up looks for the film festival.
"This is my third year at the Cannes. I am excited to be walking the red carpet in the opening ceremony," she added.
Freida Pinto and Aishwarya Rai will also walk the red carpet this year. "All three of us represent India and we will not compete on who looks better among us. We have Indian skin and use Indian make up, so if we compare it with white skin, neither sides will win," said the 27-year-old seen in films like Delhi-6 and Aisha.
Talking about Indian clothes, the actress said: "I don't think Indian clothes or make up is subtle. I think Indian women like the whole idea of being made up. Indian girls love the drama."