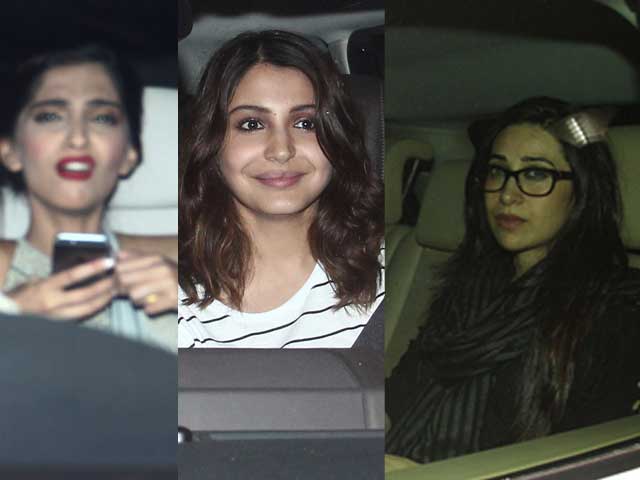 There was no band or baaja but there was a celebrity baraat at the screening of actress Sonam Kapoor's new film Dolly Ki Doli, which releases this Friday. Sonam plays a con woman in the film, marrying unsuspecting men and then making off with their money.

Sonam, of whom we got no better picture than this, was glued to her phone as she drove up and seemed mighty annoyed by the popping flashbulbs. PK actress Anushka Sharma was invited to the screening, looking casual. Item queen Malaika Arora Khan arrived with husband Arbaaz and son Arhaan. Arbaaz Khan is the producer of Dolly Ki Doli.

Karisma Kapoor made an appearance in spectacles. Her brother-in-law, actor Saif Ali Khan, has a cameo in the film. Neither Saif nor his wife Kareena Kapoor were there, but Kareena's best friend Amrita Arora was. So was Sonam's father, actor Anil Kapoor, forming a sort of solo family cheer squad. VJ-singer Sophie Choudry looked pretty in polka dots.

Actor Samir Soni and his wife, actress-turned-jewellery designer Neelam made a date night of it. Actor Chunky Pandey was also at the screening, as were Arbaaz's brother Sohail Khan and Kick director Sajid Nadiadwala.